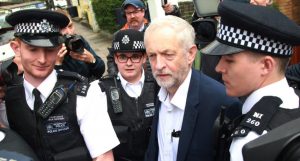 There is no doubt the UK is experiencing a sharp surge in violent crime at the moment. Moped muggings, acid attacks and stabbings are among the top anxieties for Londoners, and with good reason as well. These aren’t media invented bogeymen designed to sex up a slow news day. I’ve lost count of the amount of young men in my area – in Camden – who have been stabbed over the last year. We’ve watched this build to fever pitch and, shamefully, just shrugged it off with the same platitudes over and over – “The problem is kids don’t have anything to do these days.”

This all changed on what is now referred to colloquially as “the bloody night”. On this one night there were two fatal stabbings within an hour, one critical stabbing, and many more non-fatal. One of the young men who died is the third person in his family to be stabbed to death. What makes this even harder to stomach is that Camden is by no stretch the worst affected borough.

It is also true that that there have been huge cuts to local policing, with officer numbers falling by 20,000 since 2010. So it’s very tempting and easy to draw an A to B line between these two truths and say, well, we need more police funding and more policing. This is exactly what the Labour Party both nationally and locally are doing. My branch and CLP recently overwhelmingly passed a motion calling for police funding to go back to pre-2010 levels. Sadiq Khan has promised that the Met will significantly increase stop and search across the capital and even the left of Labour are happy to use police funding as a stick to beat the Tories with. But does more and tougher policing actually make us any safer? Does it do anything to keep our children away from the blade? Well actually it does quite the opposite.

There’s a whole world of cultural, societal, psychological, and economic issues that factor into violent crime, which is why the police could never be the answer, especially when you consider that our criminal justice system is far from holistic. A ten year study by the famously pinko lefty Metropolitan Police showed that stop and search had no impact; a 10% increase in stop and search would only see a 0.1% decrease in violent crime. Again, tougher sentencing does nothing to effect violent crime and in fact makes it worse.

According to the Knives Act of 1997 possession of a knife would get you up to six months’ imprisonment. Skip forward to the 2006 Violent Crime Reduction Act and the maximum sentence is doubled from two to four years. More people than ever are being imprisoned under these Acts, yet our rates of rehabilitation are heart-breaking. 44% of adults released from prison are re-convicted within a year and it seems prison as punishment (as opposed to community service and other punitive actions) actually increases the chances of re-offending.

This is before we even begin to get into the very sticky question of who is actually the victim and who is the criminal. The invisible undercurrents in Camden’s river of blood are the adult groomers. Drugs don’t just magically appear in our communities. There is a global supply chain at play and gangs have extremely strict and exploitative hierarchical structures. Initiatives like stop and search will never give you access to the puppet masters.

It should also be noted that even with the best will in the world (and that’s not something I often afford the police) policing its self is perverted by knee-jerk political responses. Police targets actively hamper the fight against violent crime. In 2013 it was widely publicised that police were encouraged to put robberies through the system as lost property as a way to meet policing targets. On the other hand you have some of our most vulnerable (and very often BAME) people being made an example of in order to swell arrest numbers. A Metropolitan Police Federation report in 2014 claimed quotas for arrests and stop and search (which is already up to 10 times more likely to target BAME people) were unrealistic, demoralising, and encouraged unethical behaviour. This is leading to a situation where kids are ending up in the criminal justice system who have no business being there, which is even more alarming when you consider our rehabilitation rates.

Our most vulnerable communities are not stupid. They know they can’t rely on the police and they know they are disproportionately targeted by them. All tougher policing does is destroy any chance of these people forming some sort of positive relationship with social institutions, which in turn leads kids into gangs.

So what can we do? We need to have the hard argument (and trust me, socialist or not, when you’re faced with a grieving family arguing against further police funding is very hard) and make the positive case for why social provision and the welfare state are the way to go. Early intervention programmes work. There is a huge link between family instability, poverty and violent crime. Things like SureStart centres, parental training, family support, youth outreach work and after school clubs have been proven time and again to have a beneficial effect on the health, educational attainment and behaviour of children and young adults. There is also a very pronounced link between school exclusion and violent crime. You don’t often hear about how an obsession with exam results, teamed with the chronic underfunding of schools and a myriad of cultural and social issues, leads to expulsions and pertains to knife crime. But you should.

As well as getting social services to a point where they can do more family support and less crisis control, mental health services also need to act as preventative measures. You can’t just step in once the shit has hit the fan. Mental health and trauma has to be actively worked on every day.

Obviously people need to have their material needs met. This will cut out a lot of the basic roles that gangs fulfil. This means clean safe social housing, free education, a liveable dole, and a fully functioning NHS, including rehabilitation services.

But we also need to be bolder than this. It’s not just about clawing back a lot of what we’ve lost. We need to blaze a new trail by seriously calling for the legalisation of drugs, not because we are cool libertarians who are down with the sesh, but because until this happens we will always be fighting a losing battle. The black market drug trade is worth a mind-boggling amount of money and where there are drugs there is violent crime. Georgia Gould, leader of Camden Council, recently said “If you engage in recreational drug use you’re implicated in child exploitation”; but this is misdirection.

For as long as we continue to pretend that the criminalisation of drugs does anything but cause misery, violence and mass incarceration, we are all implicated in child exploitation. 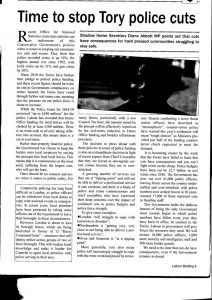 Article by Diane Abbott in Labour Briefing magazine (the Labour Briefing Co-op one, not the LRC one – so no website) advocating more police, prison officers and border guards