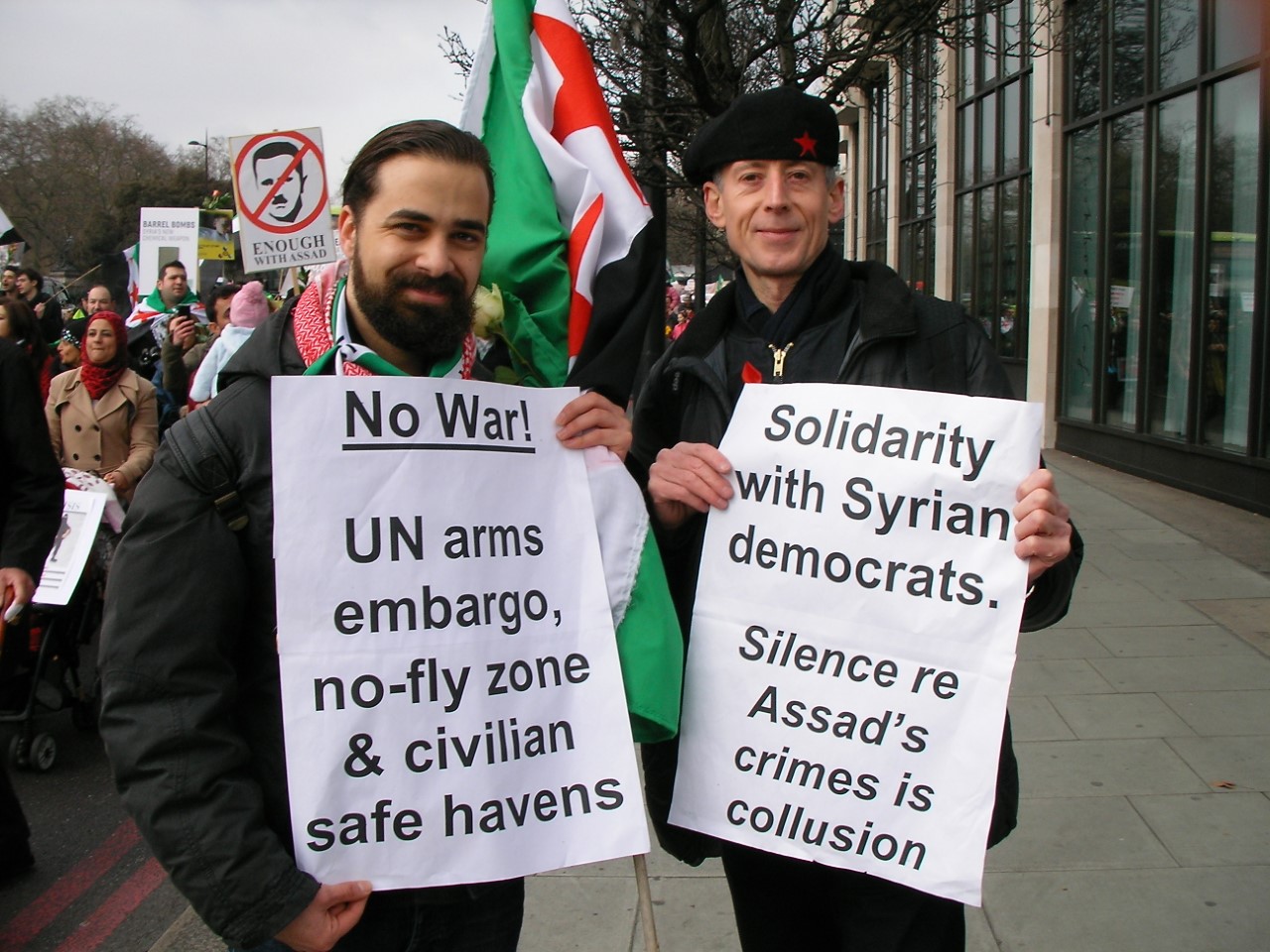 The UK response to the Syrian war has always been from a western perspective, that we know best. The voices and interests of Syrian democrats, socialists and civil society activists have been ignored, marginalised and near silenced – even by the Labour Party and Jeremy Corbyn.

This pains me. I have known Jeremy for nearly 40 years. He’s a good man. I support his bid to empower Labour members and his agenda for social justice. I want to see him as Prime Minister. But on Syria, he’s got it wrong. He’s failed the Syrian democracy movement.

With notable exceptions like the late Labour MP Jo Cox, few people have listened to appeals from the progressive, non-violent anti-Assad opposition; the millions of Syrians who marched for democracy in 2011, many of whom were massacred by the ‘Baathist Butcher’ of Damascus, Bashar al Assad.

The mass indiscriminate aerial bombardment of Syrian civilians by Assad and Putin has echoes of Guernica in 1937. But unlike then, nowadays most of the Labour left are not rallying to the cause of the democrats, against the fascist tyranny.

Democratic Syrians have for years pleaded for peaceful initiatives: UN-mandated no-bomb zones, civilian safe havens and humanitarian aid drops, which would de-escalate the conflict and save civilian lives. But they have been ignored by Jeremy Corbyn, the Labour Party and the wider anti-war and left movements.

Unsurprisingly, successive Tory Prime Ministers, David Cameron and Theresa May, who had the power to push for UN-mandated action, have done nothing. They offered only tears and sympathy.

And sadly, Jeremy Corbyn and Labour are no better. They’ve occasionally condemned Assad and his Russian state terrorist allies – mostly very weakly and obliquely. But they never took or demanded any practical action.

Despite Jo Cox’s urging, the Labour leadership failed to organise parliamentary time for a debate and vote to mandate UK humanitarian aid drops to besieged civilian populations, in accordance with the UN mandate, Responsibility to Protect. They failed to press the government to do the same.

I remember with horror how Labour’s Shadow Home Secretary, Diane Abbott, chaired a Stop the War Coalition meeting on Syria at parliament in November 2015 with no Syrians on the panel – at a meeting about Syria! When anti-Assad Syrian democrats tried to speak, to urge humanitarian aid drops, Abbott closed down the meeting. The BBC’s Daily Politics later exposed this silencing of progressive Syrian voices.

Shamefully, Labour has never organised even one event in solidarity with Syrian democrats, socialists and civil society activists. Nor did it support the UK rallies in solidarity with the Syrian movements for peace, democracy and human rights. It failed to promote the 2016 passage of Canada’s UN Syria resolution under 377A – Uniting for Peace – which called for the immediate cessation of hostilities, humanitarian aid access and an end to all sieges.

Jeremy Corbyn specifically and loudly condemns Saudi war crimes in Yemen. I applaud him for his stand, which contrasts admirably with Tory collusion with the Riyadh dictatorship. But his condemnation of the fascist Assad regime and Russian neo-imperialism is comparatively muted. He has resorted to bland, non-specific phrases like “we condemn all bombing,” which mirrors Trump insultingly responding to the Black Lives Matter movement by saying “all lives matter.”

For years, Syrian democrats and civil society campaigners had been urging Labour to push for humanitarian aid drops to the millions of civilians trapped and besieged in cities, towns and villages by Assad’s fascist army, without food, medicine and fuel.

Jeremy ignored those appeals, so Syria Solidarity UK decided act – very appropriately during his speech on Human Rights Day in 2016. 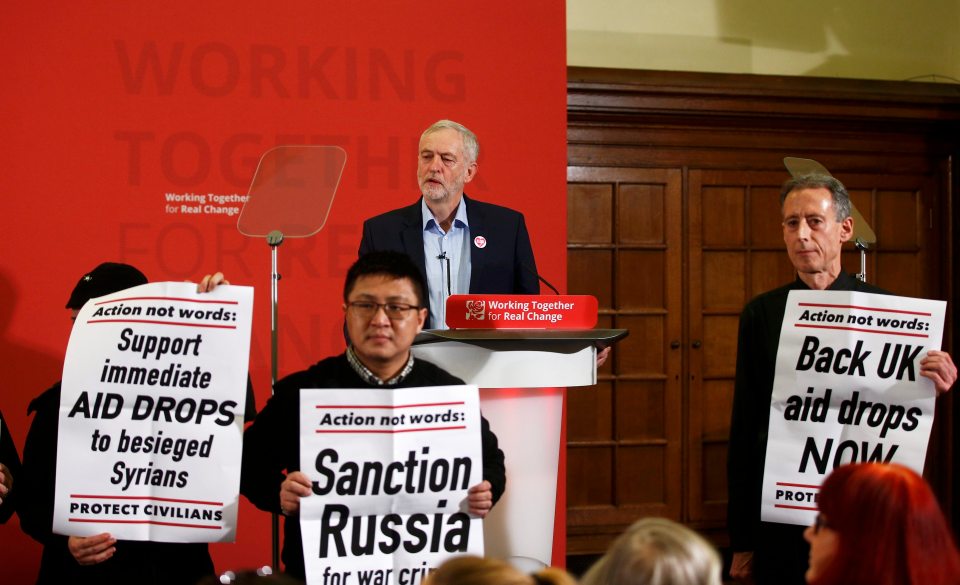 Seven of us, Syrians and allies, walked to the front of the room and stood below Jeremy with placards saying: “Action not words: Back UK aid drops now. Protect civilians.”

Our goal was to get Labour to push for a parliamentary vote on humanitarian aid drops of food and medicine and for sanctions and war crimes charges against the Assad and Putin regimes. Neither Labour nor Jeremy had actively campaigned for either of these initiatives.

We were hoping that Jeremy would respond to our protest by saying that he heard and shared our concerns and would raise the issue in parliament. But Jeremy gave no such assurances. He drowned us out every time we tried to speak. So much for his professed support for the right to protest!

The question we asked then and we ask again now: Why isn’t Jeremy holding the government to account for its inaction​ on humanitarian aid drops​, and publicly demanding that it agree to a vote in parliament ​to air drop that aid using GPS-guided parachutes?

If Jeremy had responded to our protest by promising to go to parliament to press the government to agree those initiatives he would have scored a public relations coup and won huge public sympathy. We created an opportunity for Jeremy to show real leadership on Syria and to wrong-foot Theresa May and Boris Johnson over their inaction. Sadly, he ducked it.

Our protest reinforced other lobbying for a Syria debate in parliament, which happened four days later. But when it took place, Labour again failed to press for a vote to mandate UK aid drops.

This was a huge and continuing disappointment. I urge Jeremy and the Labour frontbench to think again. Syrian civilians need actions, not words. Hear their cry for help, don’t ignore it.