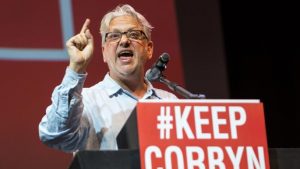 The decision by the Labour Representation Committee to seek candidates to stand in a partial slate against the Momentum backed NEC candidates is understandable.

There is deeply felt and growing frustration at the complete absence of democracy in Momentums decision making, including in candidate selection. Organisations including Red Labour have long been voicing their disquiet over the manner in which decisions like these are made; The Clarioneditors share the concerns.

However, what is needed is a more robust approach than another small group of left organisations declaring their own set of candidates. There is no indication that the candidates will be anymore democratically selected or that they will be representative of the breadth of the left.

We need serious discussion about how candidate selection can be agreed with the maximum democracy possible and for a broad range of groupings to sign up to this. NEC nominations close in three months and it is unlikely that such agreements and processes can be agreed in time.

It is also the case that while the left is advancing within Labour politics is a funny game and much can change very quickly. We need to keep our heads and think through the implications of our actions. The gut instinct to rebel against the appalling way Momentum national leadership has behaved is right and good, but there is a bigger picture. Open Labour have already split from the CLGA and will be supporting Ann Black in opposition to the Momentum slate and possibly other candidates. We cannot afford for the left to fragment.

Over the next period those on the left committed to reversing the antidemocratic tide which overtook Momentum under the helmsmanship of Jon Lansman should work together to aply maximum pressure for a change in direction from those currently dominating the left nationally. There are indications that there is growing unease at the lack of plurality and autocratic nature of decision making from within Momentum as well as from external groupings and the grassroots. We should exhaust the possibilities of rescuing Momentum and forging a new left alliance with democratically selected candidates before allowing the left to degenerate into warring factions.

For now, the left should support the Momentum-run slate, but prepare ourselves for the next round.

NO: Fight for a more democratic process

The Momentum slate for the Labour Party NEC elections this year has been chosen without any real involvement or participation of grassroots Labour Party activists or members.

This is symptomatic of the growing democratic deficit in Momentum. Anyone who is a socialist and believes in political change from the bottom up should be worried by this lack of democracy. Anyone who wants a Labour government committed to delivering for working class people should be concerned. A healthy democratic left organisation in the Party is necessary for a successful Labour Government.

Decision making of the Centre Left Grassroots Alliance slate for the NEC elections has been controversial in the past. Input from certain left labour organisations was effectively vetoed, and there was a biased selection of others that accorded with (or could be relied on to accommodate to) the politics of the leading lights of CLPD. Their politics was in parts Stalinist, in parts soft left, and timid on policy except in foreign affairs. But now the stakes are much higher, and there is an alliance with Momentum whose data operation dominates the “left” in the Party.

The left is in the leadership of the Party and there is a real possibility of a Labour government within the next few years. The lack of a left organisation which is able to call leaders and internal Party representatives to account will be a real weakness. Put simply with the left in the ascendance democracy in the left becomes more not less important.

Secondly the ability of the Momentum machine to deliver in internal Party elections, setting the agenda of Conference etc. Because of Momentum’s dominance, it has become in effect a vehicle for the new careerists. Everyone is a Corbynista now. In the event of a Labour Government however we do not need cheerleaders but people ideologically committed to working-class people’s interests – for massive investment in public services, a radical extension of public ownership, unashamedly for workers’ rights and the abolition of the anti union laws, and a transformed welfare system.

Under the cover of “members-driven” Labour Party what is actually being promoted is control by a clique at the top, participation in digital consultations with no binding power at the bottom, and an attempt to create a left cultural hegemony of inadequate, and often very bad, apparently ‘left’ ideas. This is far from the best traditions of labour movement democracy.

Even in its social democratic/‘labourist’ versions there has been an openness to debate and at local level in the Labour Party and development of informed activists. At present Momentum appears to be just another form of machine politics which is contemptuous of even these mild norms within the Labour Party. Despite all the talk of member driven politics what people see is a cynical use of OMOV when it suits. It is a distorted reflection of the worst of the trade union bureaucracy – without the discipline of answering to a working-class base.

There is political will from some organised socialists, notably the Labour Representation Committee, to put (at least some) alternative candidates forward for the Labour NEC elections this year. This should be supported and left organisations that care about grassroots democracy should accept the open invite to discussions from the LRC to ensure that broadly supported credible candidates are on offer. There is time to organise nominations as English CLPs are not meeting until after the local elections in May.

Socialists should act now to demand greater democracy and accountability on the Labour left. What we do not challenge now we will be forced to fight in the future