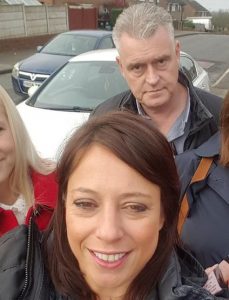 The marginal constituency of Ashfield, the seat of Gloria De Piero, has been rocked by the defection of Piero’s office manager in the constituency, Lee Anderson as well as another Labour councillor to the Tories.

He and his co-defector, former Labour council leader Chris Baron, claimed that their defection was the result of Momentum’s influence in the constituency. Clear nonsense. For Momentum has only existed for a matter of weeks in Ashfield.

Whether any more of Lee Anderson’s colleagues on the right of the local Party join him in the Tory Party is yet to be seen. At the time of his defection, he announced to the press that he was still working for Gloria De Piero. He made no resignation from that post. One would hope that De Piero will have little choice other than sack him but they have had a long and close working relationship.

There is no pretence of wanting to reclaim the centre by Anderson and the other prominent defector. No, the Tories is the home they have chosen and deserve. And the defectors announced their defection in a photo-op with disgraced Tory MP Ben Bradley, renowned for his libellous tweet against Jeremy Corbyn.

These defections come as no surprise to Party activists in Ashfield. Anderson was rejected to continue as councillor by a panel appointed by Regional Office.  In the period directly before his defection, and whilst still a Labour councillor, Anderson tried to rebrand himself away from anything that could be considered ‘Labour’. In an unpleasant campaign directed against travellers, he exploited all the usual prejudices and difficulties, and did a token blockade of their site, for which he was suspended from the party. A campaign that would have not been out of place coming from UKIP.

Anderson had been De Piero’s campaign manager in June 2017. Under his direction, canvassers were instructed not to mention Party leader Jeremy Corbyn. In fact, canvassers reported that Anderson accepted without denial shameful criticisms of Corbyn coming from far-right constituents on the doorstep. There was no serious campaign to fight for Labour’s radical policies under his direction.

Not surprisingly the election results in Ashfield were one of the worst in the country for Labour with the Tories nearly doubling their vote whilst Labour’s barely increased.

There have been numerous complaints made by left wing members in Ashfield Labour to Labour Party Regional Office. Bullying, discourteous behaviour were experienced by many of them.

They also faced a 2017 AGM where two branches had their delegates barred from voting without warning and 16 GMB delegates, most unseen before, turned up to prevent the left taking hold of crucial positions that their numerical strength in the constituency would justify.

It has yet to be seen whether the joint resignation of Anderson and Baron is just extreme personal opportunism. It is probably no coincidence that they take place at the same time as the hard right’s influence at Labour Party HQ breaks down. They can no longer rely on a biased Party machine to work in their favour.

We await to see whether there will be further defections by any former Labour Party officer, representative or worker elsewhere. If there is, then such destructive behaviour need not be as damaging as may be feared.

Many activists in Ashfield feel palpably relieved by the defections. It will mean greater Labour solidarity and cohesion within the local party. It will make it easier for them to forge a genuine radical local Labour local voice in their communities.

Whatever happens, Party activists across the region will need to support Ashfield and any other CLP affected by such turncoat.

Below: Anderson’s blockade of a traveller site; Anderson with Ben Bradley (and with Gloria De Piero, above); fake social media accounts set up to harass Momentum members in the constituency 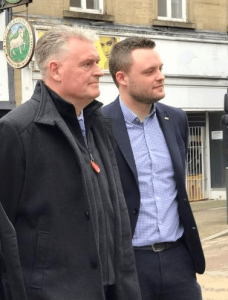 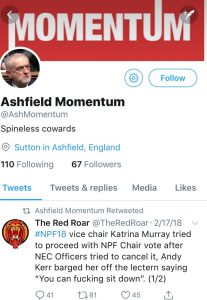 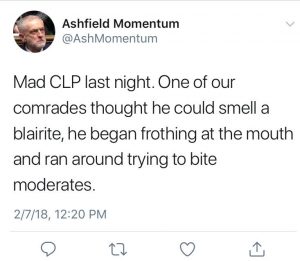