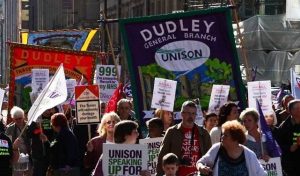 By Jack Downes and Daniel W. Round, both of Stourbridge CLP

Dudley Momentum’s well attended monthly meeting on 13 March kicked-off with a report on the UCU strike from a Sandwell College member of staff. Union and local Labour left activist Rhiannon Lockley gave her apologies, but sent her own statement on the strike and the movement among UCU members against capitulation, calling for support from attendees of the meeting.

Clarion co-editor Simon Hannah, author of new book A Party With Socialists In It: A History Of The Labour Left, followed this with the main talk of the evening. Simon outlined his book’s main themes and the history of transformative and integrationist currents within the Labour Party. He charted some of the party’s main left-wing movements, from Bevanism to Bennism and on to Corbynism, and gave his views of their differing strengths, weaknesses and limitations.

After his talk, Simon opened it up to a wide-ranging discussion. Questions were heard and arguments made regarding the parameters of electoral politics, the role of Momentum and the trade unions on the left, the dangers of the civil service, and what might come after Corbyn. Before leaving, Simon summed up his hopes for the future of the Corbyn project but also cautioned about the pressures a left-led Labour government might face. A number of copies of the book were sold, and it was decided to hold a reading group session around it over the next couple of months!

Following this, general group discussion centred on the upcoming local elections and the support Dudley Momentum can provide to local campaigners and candidates over the coming weeks. Early PPC selections were also discussed, with local organiser and CLPD activist Steve Price giving an update on his work in supporting potential left-wing candidates across the West Midlands. The group speculated about possible candidates for the next West Midlands metro mayor election in 2020, and who the left might look towards backing. A report was also given by members of Stourbridge Young Labour on their ongoing voter registration drive in the town centre, and their recent attempts to engage young members in neighbouring CLPs.

After some months of stop-start, on-off activity in what is not often the most fertile of areas for the Labour left, Dudley Momentum is finally finding its feet. The group is now supporting activities throughout borough, both by organising campaign events in the run up to 3 May, and by building new channels of communication to unite and organise the left across Dudley’s four disparate constituencies.