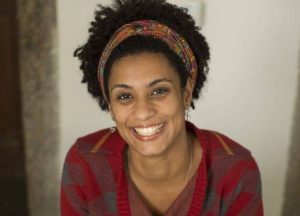 On 14 March Marielle Franco, socialist Rio de Janeiro city councillor, was assassinated by a gunman while travelling in her car; her driver, Anderson Pedro Gomes, was also killed. Only a few days before Franco had made official accusations about police violence.

Franco was a member of the Party of Socialism and Freedom, a left-wing split from Brazil’s equivalent of the Labour Party, the Workers’ Party/PT. She grew up in Rio’s slums and as a black politician from that background was extremely popular, coming fifth out of about 1,500 candidates in the city’s 2016 council elections.

In February, the right-wing, unelected government of Michel Temer began a “federal intervention” of military forces in Rio, justified on the basis of the need to deal with gun violence and drugs, but legitimising a violent crackdown in poor neighbourhoods. Franco had been central to opposing this invasion.

Tens of thousands have protested against the assasination in cities across Brazil. We send our solidarity.

For much more detail see this article in Jacobin.