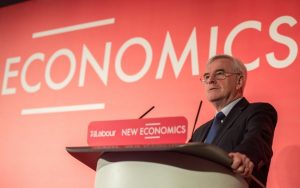 As reported in Clarion 13, Labour recently organised a conference to discuss their Alternative Models of Public Ownership document, published in early 2017 by John McDonnell and Rebecca Long Bailey MP.

The fact that Labour has organised an event like this at all is a really positive step forward. The venue was packed with nearly one thousand people who had come to hear and take part in a debate with the unions and Labour leaders over the economic policies associated with ‘Corbynism’. If Labour wants to build a movement of activists who are well versed in its ideas and informed enough to take part in cutting edge debates in the party then events like this should become regular features.

McDonnell gave a robust opening speech which didn’t add anything new from the document published in 2017. Cat Hobbs from the anti-privatisation ‘We Own It’ campaign gave a brilliant talk setting out how privatisation has failed in Britain even against its own criteria for success. Other speakers were a little more staid and the unions were not particularly radical. When Sian Errington from Unite spoke it became clearer that a lot of the economic policies of the Labour left are essentially Unite’s programme and no further. Anna Minton’s contribution on the housing crisis and Cllr Paul Smith’s explanation of the ways that Bristol Labour councillors have sought to play the game within the limited confines of what is possible in local government were both useful.

A major theme of the event was the expansion of the co-operative sector. The Co-operative Party are excited about the proposal to double the size of the sector but the document Labour has produced at least acknowledges the problems of relying only on cooperatives, that they are islands of socialist ideals in a sea of market capitalism and increasingly end up exploiting their own workers through the logic of competition. Co-operatives will have their place in a socialist economy but cannot form the basis for socialism with democratic planning of production and distribution.

This related to another theme that some speakers touched on: how to make public ownership irreversible. A Labour government might renationalise the rail and the postal service but what about when the Tories get back in – what would stop another round of privatisation? One answer seems to be that the nationalised industries would not be state run but rather run by workers and consumer co-operatives. This would mean that they were not the property of the state and therefore a government could not sell them off. An interesting idea, though it was only limited to the railways and the post, in other words services and not production.

In a sense the ideas are a revival of old fashioned social democratic mixed economy politics but with a twist. The collapse of that political-economic order in the 1970s and the triumph of Thatcherism and neo-liberalism have left a generation or more of people feeling the precarious existence of an increasingly unrestrained capitalism. McDonnell and Corbyn want to restore ‘fairness’ to the economy through a slight rebalancing.

The calls for public ownership and new forms of running industry appeared quite modest – limited to only a handful of industries that have been privatised. In this sense it is far less radical than the Alternative Economic Strategy of the 1970s and Labour’s call for the nationalisation of the the top 25 companies in Britain in their 1973 programme. The 1974 manifesto also stated that “in consultation with the unions, we shall take steps to make the management of existing nationalised industries more responsible to the workers in the industry and more responsive to their consumers’ needs” but Labour in power utterly failed to implement that policy. How can we ensure it succeeds this time?

Those socialists who believe that nationalisation of water, rail and the municipalisation of energy will lead to a capitalist class rebellion are very much mistaken. Increasingly the capitalists are responding positively to the noises coming from the Labour leadership because there is a section of the bosses who fear Brexit and are increasingly unhappy with the Tories lack of any serious industrial plan. Corbyn’s proposal for some limited nationalisation and a £500bn investment bank sounds interesting compared to the thin gruel the Tories are offering up.

The real fear the capitalists have is that Prime Minister Corbyn opens the door to more radical demands, that working people get a taste of power, a feeling of strength from a left Labour government. This would lead to a precarious balancing act for a left labour government, trying to balance the demands of the capitalist elite not to go “too far” with millions of Labour supporters who want them to push ahead with deeper and more radical economic policies.