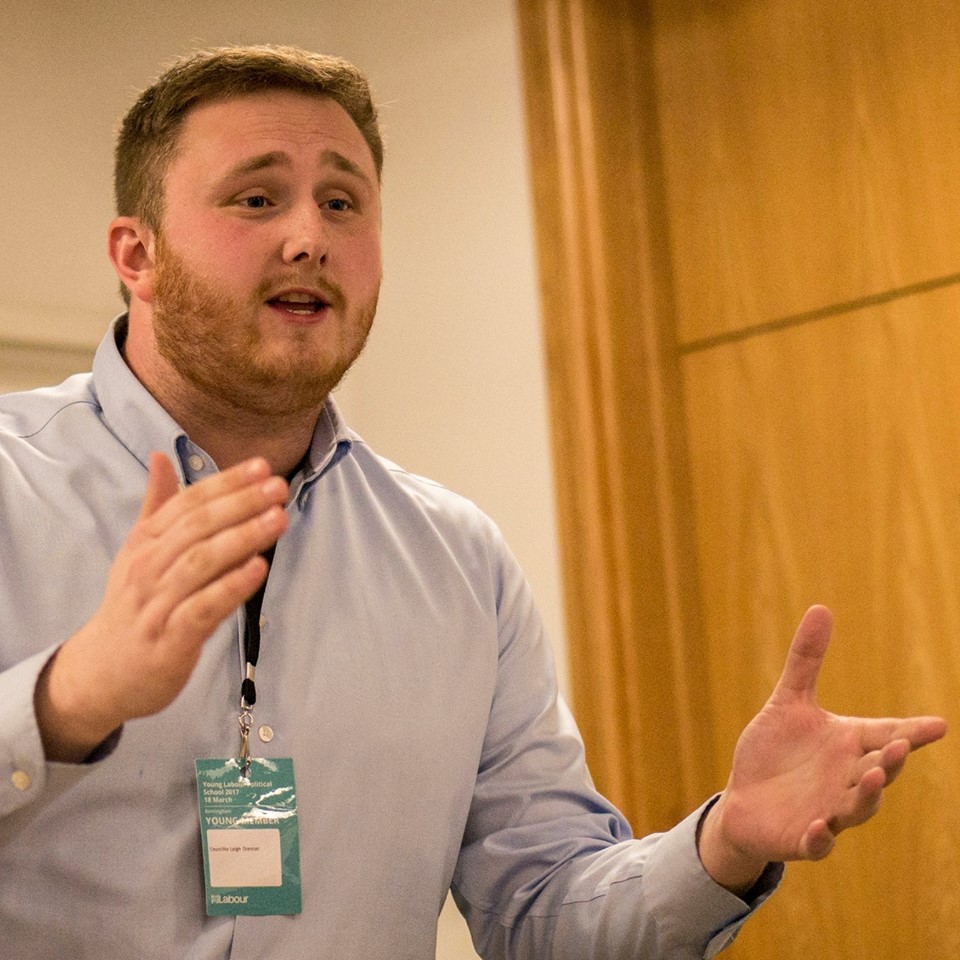 Leigh Drennan is standing to be Chair of Young Labour and has the backing of Momentum. Clarion editor Daniel W. Round spoke with Leigh about his campaign and ideas.

As Chair, what would be your top three immediate priorities to transform Young Labour?

First of all, my campaign is all about democracy in Young Labour. We have One Member, One Vote (OMOV) for the first time in these elections which means that all YL members will have the chance to vote for their Chair. I am proud that it was my motion that went on to change these rules. There is some hostility from some senior party officials to OMOV, so it is important that we entrench it as a system and expand democratic practice more generally.

Secondly, we need to get hold of our own finances and become properly autonomous. Youth wings of socialist parties across Europe have their own support and funding. If Young Labour had such autonomy, with full-time paid staff and a budget, we could make a huge difference nationally.

Thirdly, we need to get more young members involved in trade union activity. We need to make YL members proper trade union activists and educate them about organising in the workplace. We are, after all, the political wing of the labour movement.

More activists are starting to set up local YL groups, but there is almost no push for this from either YL nationally or the party. What would you do to address this as Chair?

I don’t know whether that’s entirely accurate. As Chair of North West Young Labour, I travelled around the region to help set up YL groups – for example, the excellent Tameside and Stockport Young Labour group. These new groups are a good base to build from.

I agree that some party apparatchiks do stand in the way because they are afraid of bringing new people in, especially as the majority of the young members that have joined recently are Corbyn supporters. This would motivate me, as Chair, to travel around the country and continue to encourage the establishment of new YL groups at the national level so we can become a real force.

How would you support workers’ struggles, and how would you encourage young members to become effective workplace organisers?

First of all, young members need to be encouraged to join a trade union – there is no excuse now with the option of Unite Community membership. Honestly, Labour hasn’t been good enough at political education. The party, YL in particular, should follow the example of the TUC’s excellent organising academy programme and educate members to equip them so that they become effective organisers in their workplaces.

Labour youth movements in the past – such as the League of Youth and Young Socialists – were hotbeds of debate between different socialist traditions and viewpoints. How can we turn Young Labour into such a movement and how can we ensure that, in the process, the organisation is pluralistic, democratic and comradely?

Again, I think entrenching OMOV for electing the leadership and extending member participation is crucial to facilitate debate, allowing for fair and strong representation from the trade union affiliates. In terms of being comradely, people simply need to respect each other and their opinions. We need to work together. We have more in common.

With Brexit fast approaching, would national Young Labour be a campaigning force for freedom of movement if you are elected Chair? What do you think immigration policy should look like under a post-Brexit Corbyn government?

I voted for the motion on freedom of movement at the YL Policy Conference last year. However the motion fell and ultimately policy should be decided democratically, not by a dictator Chair!

On immigration, the Tories take a hard line, but when numbers fall standards of living do not improve. It is the economic system that causes problems for people, not immigrants. I myself am descended from Irish immigrants; third-generation. My family came here to build a better life and provide opportunities for their children. We are, after all, a country of immigrants and we should always remember that.

In your experience as a councillor, do you think there is more that Labour councils could do to lead the fight-back against Tory funding cuts?

I think it would be a good idea for more Labour councils, when proposing a budget, to set out what they can and will do with the money they have while also saying what they would be able to do if funded properly – say, along 2010 levels. Labour in local government needs to demonstrate more forcefully that austerity is a political choice and that cuts in services are ultimately down to the Conservatives in central government. Labour councillors don’t make cuts themselves; they are only able to spend the money that is available to them.

Regarding the party purge, are there any changes that you would you like to see to the party’s disciplinary system?

People need to be made fully aware of complaints made against them. The whole disciplinary system should be made more transparent. Members shouldn’t be left waiting in limbo for months, and we should probably look at some sort of statute of limitations.

You have taken a strong stand against the hatred faced by trans activists; solidarity. How can we make sure Young Labour leads the way in making our party an accepting, tolerant and open place for all?

As young activists, we need to set an example for the rest of the party. Young Labour should be completely inclusive. We support people of all backgrounds, lifestyles, and abilities, and stand in solidarity with our trans colleagues. I don’t believe you should cherry-pick the injustices that you challenge. As a gay man, I am acutely aware of the battles fought in the 70s, 80s and beyond for our rights. We won in many quarters, but not all. Today, those same challenges are faced by trans men and women.

Debate is of course fine, but we should never tolerate bile and abuse. If there is no respect, there is no debate as far as I am concerned.

For more on Leigh’s campaign, please click here. Voting for the youth elections closes on 16 March.

Let us know what you think by commenting or emailing theclarionmag@gmail.com