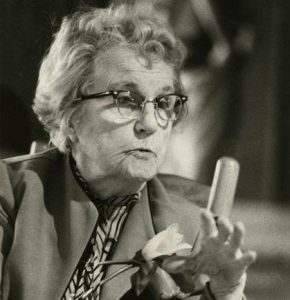 Greenham Common women sang “Which side are you on?”, inspired by a song written by Florence Reese (pictured) after her husband was arrested during the 1931 Harlan County miners’ strike.

Both songs urge the listener to decide if they’re on the side of the oppressed or the oppressors; the creators of wealth or its thieves. Women Against Pit Closures sang them during the picket lines and demonstrations of 1984-5.

These are shared songs about shared experiences of solidarity. They reflect spaces and movements where working-class women (and men) have learned how to organise, how to educate themselves and others around them, and how to agitate to draw others into struggle. There are many other examples, like the East London Federation of Suffra gettes or the Glasgow rent strikers of World War One.

Contrast this class training to the “gold standard Aspiring Leaders and Candidates Resident Training… designed for women who are preparing for leadership” offered by the Labour Women’s Network. This is an attempt to create not more fighters like Laura Pidcock, let alone anyone more radical, but more women MPs like those led by Harriet Harman who refused to vote against the anti-working class, anti-women Welfare Reform Bill in 2015.

They have sided time and time again with the enemies of our class. Which side are you on?

• See also ‘Their feminist reading list and ours’, by Rida Vaquas