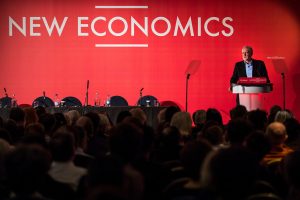 Labour’s Alternative Models of Ownership Conference in February was organised around the report that came out in June 2017.

Now is the perfect time to engage members in conversation about how best to deliver public services after the collapse of Carillion, and the spectacular end (hopefully) of the Haringey Development Vehicle.

The day started with a rousing session that included a speech by John McDonnell. He argued for reversing decades of privatisation and discussed the benefits of new models of public ownership – not just state-owned, but accountable, democratic and worker-controlled services, delivering results for the public rather than shareholders.

He was joined by the excellent Cat Hobbs from We Own It, who have been campaigning for publicly-owned utilities and services since before it was sexy, and Andrew Cumbers from University of Glasgow.

The session on ‘developing our manifesto commitments to public ownership’ was led by speakers Sian Errington from Unite, Andrew Towers from the CWU and Mick Whelan from Aslef. They agreed that the 2017 manifesto has opened up considerable potential. Labour is no longer gingerly posing the option of taking back control of services if they fail in private hands, but arguing that public ownership is in and of itself a good thing. The speakers all stressed that solutions and models of ownership should come from the workers themselves and should be tightly bound with local circumstances. They challenged the ‘Lexit’ assumption that it is membership of the EU that stands in the way of renationalisation.

The ‘local democratic economic strategies’ meeting featured Cllr Matthew Brown, who has become something of a minor Labour celebrity with his lauded Preston Model. The session also included Ted Howard from Cleveland, Ohio – who provided the inspiration for the Preston Model – and Heather Wakefield from Unison. In brief, Matthew presented the procurement ‘miracle’ they’ve achieved by using anchor public institutions that leverage their substantial procurement power to breathe life into local small businesses. Ted Howard then expanded on those principles, speaking about localism, multipliers, partnerships and more.

In the final plenary, Anna Coote from the New Economics Foundation, Spiros Sgouras from the worker-owned Vio.Me in Greece, Hilary Wainwright from Red Pepper and Olivier Petitjean from l’Observatoire des multinationales all discussed various countries’ track records of renationalisation. They spoke about why taking ownership might work better at a local level, and how ultimately we would need a tight network of ‘transformative’ workers unions to enable socialism to transcend national borders and become a sustainable project. At the same time, hyper-localisation may lead to undesirable outcomes in terms of social attitudes to migration and ‘otherness’, as well as potentially raise inequality as regions and localities are not equal, and the state would need to play the ‘leveller’ role.

The day ended with a detailed speech by Jeremy Corbyn, who spoke about the environment and how publicly controlled services are key in our fight against climate change. You can read Corbyn’s speech here.

A key observation from the day would be that, sadly, there were far too few representatives from Labour councils. We are looking at local government to lead the way in making changes while we don’t have national control, and they should have featured more heavily.

• We hope to carry more analysis of the conference and the issues and debates it raises in our next issue. See also ‘Corbynism, models of ownership and industrial democracy’, from issue 12, by Simon Hannah.