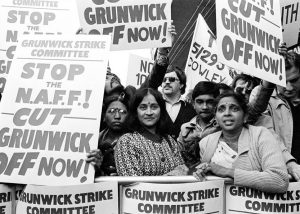 When times are hard it is usually women who are hit hardest. Austerity has packed quite a punch for women in the UK.

Research conducted last year by the House of Commons Library found that the cuts have cost women a total of £79bn since 2010, against £13bn for men. By 2020, men will have borne just 14% of the total burden of welfare cuts, compared with 86% for women.

We continue to dominate part-time, insecure and low-paid work, manage the bulk of childcare and housework and our reproductive rights remain inadequate.

In the face of this reality, what is the most effective form for women’s politics in our movement to take? What are our demands and how can we fight for them?

We have precious little in the way of a women’s movement; specifically a working-class women’s movement. Middle-class women have tended to dominate modern feminist politics; much of the focus has been versions of breaking the “glass ceiling”. There is plenty of noise about allwomen shortlists for council and parliamentary seats. While the desire to have more women in Parliament is valid, we know the majority of those women will be middle-class (and white).

Even if we get a hundred more female Labour MPs, it’s no substitute for a vibrant movement of working-class women formulating and raising our own demands.

When working-class women find their voices the results are powerful. Jayaben Desai was one such woman whose passion and courage helped change the way the trade union movement viewed not only women but black and in particular Asian women. Her words to her manager on the day the Grunwick strike (pictured above) still echo today:

“What you are running here is not a factory, it is a zoo. In a zoo, there are many types of animals. Some are monkeys who dance on your fingertips, others are lions who can bite your head off. We are those lions, Mr Manager.”

There isn’t a much better example of the confidence and aspiration a strong women’s movement can create in the women who are part of it than Women Against Pit Closures, started by the wives, mothers and daughters of striking miners in 1984. Bridget Bell, secretary of WAPC, put it like this:

“We all speak with one voice when we say that the strike absolutely changed our lives in understanding the power of collective action as women. We were unique in the 20th century as an organisation of working-class women coming together as women. Collective strength was the result. After that, the women who were involved were never isolated at home again.”

It is this kind of history we can look to when we think about how women in Labour can win. It is a militant history of courage and solidarity.

Effective action can win funding for our domestic violence services, decimated by austerity and leaving women with nowhere to go to escape violence.

A strong women’s movement will give strength to each individual to call out sexual harassment because she knows that there will be thousands of women who have her back and sanctions against perpetrators.

The Labour manifesto promised some added protections for women: action against maternity discrimination, protecting funding for domestic abuse services and, vitally, positive trade union rights through which women can organise to win rights at work. But it did not go far enough.

We don’t just need protection of a woman’s right to access free safe abortion; we need an extension of those rights to make terminations available on demand with no time limits.

We need to fight the scourge of low pay – yes we want a living wage, but we want more than that! We want pay that keeps pace with inflation, we want guarantees that if we stay home with children our pensions and pay don’t suffer.

We need solidarity from across the labour movement with women workers – the kind of solidarity that sees stronger and more organised workers striking in solidarity with the women who dominate caring professions like nursing and social care – and manifesto commitments from Labour to reverse the trade union legislation that makes this illegal.

What demands we make should be discussed throughout the movement. Ultimately we need a movement that enables working-class women to set our own agenda and pick our own battles. To see these battles lead to victory, we need revitalised women’s sections in our party and our unions; but these women’s sections must have teeth! We need funding and democratic structures that mean the ideas women generate ourselves are the ones that Labour fights for.

We need a discussion about how we can make this happen.