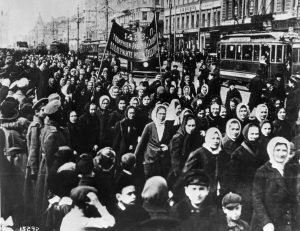 As International Women’s Day gets subsumed into popular bourgeois culture we must remember its true revolutionary tradition.

In the Russian capital Petrograd on 8 March 1917 (our calendar, only adopted in Russia later under the Bolsheviks), many thousands of women textile workers went on strike and took part in huge mass demonstrations. This was a movement led and instigated by the women workers.

A truly inspirational movement that seven days later brought an end to the hundreds of years of Czarist rule, and ultimately led to the October workers’ revolution.

“Thus the fact is that the February revolution was begun from below, overcoming the resistance of its own revolutionary organisations, the initiative being taken of their own accord by the most oppressed and downtrodden part of the proletariat – the women textile workers, among them no doubt many soldiers’ wives. The overgrown breadlines had provided the last stimulus. About 90,000 workers, men and women, were on strike that day. The fighting mood expressed itself in demonstrations, meetings, encounters with the police. The movement began in the Vyborg district with its large industrial establishments; thence it crossed over to the Petersburg side. There were no strikes or demonstrations elsewhere, according to the testimony of the secret police. On that day detachments of troops were called in to assist the police – evidently not many of them – but there were no encounters with them. A mass of women, not all of them workers, flocked to the municipal duma demanding bread. It was like demanding milk from a he-goat. Red banners appeared in different parts of the city, and inscriptions on them showed that the workers wanted bread, but neither autocracy nor war. Woman’s Day passed successfully, with enthusiasm and without victims. But what it concealed in itself, no one had guessed even by nightfall.”