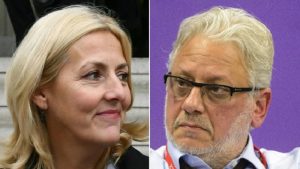 The last two and a half years have seen outgoing GS Iain McNicol acting not only appallingly but without accountability to the NEC, the Party leader or Party conference.

McNicol allowed the notorious Compliance Unit to try and rig the leadership elections through mass exclusions during the 2015 contest. He tried to demoralise new members and drive them out of the Party by using Party finances to reverse the court’s ruling that they should be given a vote.

But even on the basic responsibility to build the party and make the most of its anti-austerity policies, his performance has been poor. There has been little campaigning or materials, particularly those that might appeal to poorer voters, on issues like £10 minimum wage, mass council house building, rights at work etc.

McNicol exploited the enhanced power he enjoyed as a result of the factional paralysis on Labour’s NEC. He openly acted to try and regain the Party for its former ruling Blairite clique.

So it is good that we have an opportunity for a new Genral Secretary and all the contenders currently known would be an improvement!

The favourite, at least the seeming choice of both John McDonnell and Jeremy Corbyn is Jennie Formby. Jennie is a long-standing left wing opponent of the Blairites and Iain McNicol. By all accounts and to her credit she is prepared to argue on policy issues and party matters bluntly. She is a strong advocate of union and workers’ rights in the Party.

Jon Lansman, who declared his candidacy after Formby, has made many enemies on the left. He closed down democracy in Momentum and made it very much his personal vehicle – handing out appointed positions and patronage to gather round him a politically mixed group of ambitious individuals.

Under his leadership Momentum has ducked and dived for perceived political gain. In its earlier months, it failed to get action on the EU referendum, trying to stay on the fence as long as possible. It failed to argue for free movement, in violation of its democratically decided policy, even when this chimed with what Corbyn was saying. It shut down debate on Brexit at Labour conference last year.

Lansman fairly unilaterally closed down Momentum’s democratic bodies and now Momentum actions and policies pretty much whatever Jon decides they are.

Despite earlier occasional arguments by Lansman for mandatory selection, Momentum hasn’t argued or organised for it. Momentum/ Lansman closed down debate on the EU at last year’s party conference. That denied the Party the opportunity of coming to a position but it also gave the right wing of the Party the opportunity to claim, with some justification, that the Party hasn’t a democratically decided policy.

Now Jon Lansman argues that he wants an ‘open contest’ but it is unclear what sort of open contest Jon wants.

Momentum sent an email to members today (2nd March) inviting people to express interest in standing for the GS position. Some may wonder how sincere Jon’s desire for other candidates is. But it looks at least as if Lansman is hoping to stretch the timeline of the selection beyond any possible selection at the March NEC. If so, nothing wrong with that but the question that needs answering is ‘what after that’?

1.     Is it that there should be a proper selection from other than a shortlist of one on the NEC?

3.     Is it for the operation of the rule (see below) that allows conference to vote for General Secretary but with an ‘open contest’?

Party members who want a democracy decision should go for the third option.

The problem with “OMOV”

As with the Corbyn’s election so-called OMOV (individual postal ballot) votes can occasionally allow an alienated, unrecognised majority to be empowered to remove an arrogant, complacent and politically dominant tendency.

More normally in politics it is intended as a way by which a well-oiled machine with a database of volunteers with access to contact lists can ensure their candidate wins.

The right-wing Progress group supported the Collins proposal in its 2014 review as they thought the machine that would determine the result was their own, heavily entrenched in the Party structures.

Over the last two years Lansman has built an alternative machine in Momentum. He hasn’t shown much concern for abstract democratic principles in its operation but he has however shown a determination to get his way, believing his way was the only way. If Lansman wants ‘member involvement’, I would guess he favours the OMOV option.

Under OMOV, selections in the Party, PPC and others have too often been apolitical contests – not run on the politics of candidates but on sponsorship, selfies with leading figures etc.

That model was  particularly promoted by the Blairites for their candidates. After all, they had few principled policies on which to garner support. It also made parachuting of the leader’s allies easier.

We need radically different selection methods for the Party GS and ultimately for PPCs.

Use the Rule Book – democratise the process

The Party’s Rule Book actually already says that “The General Secretary shall be elected by Party conference on the recommendation of the NEC” (Chapter 4.II.4.a – see p20 of the Rule book here).

Obviously that is open to interpretation. In the past conference has been a barely perceived rubber-stamp for an NEC decision remote from the Party membership. That has to change, to become an election by the conference with NEC suggestions only.

The Party need to hear answers from the candidates for GS and debate them in its branches, constituencies and affiliates  up to conference

What will they do to make the Party an open and inclusive Party? Will they end the culture of bans and exclusions? How will they enable and promote active democratic debate?

What will the Candidate advocate to increase the Party’s campaigning focus? Can we not do better than one campaign day every few months?

Our Party needs to be put on a war footing to win back the generations of poor workers primarily, who have drifted out of voting or been pulled into the wake of nationalist politics of the UKIP and Tory right. What will the GS candidates do to address that?

Of course the Labour Party needs someone to ‘fill in’ until that selection. That is not unusual, we have had acting leaders of the Party whilst awaiting a democratic decision.

But Party members should call now on the NEC to begin a meaningful selection. We need an organisationally and politically competent GS. Using Tony Benn’s 5 principles of accountability, we need to know not only what he can do – we have seen that negatively –  we need to deal with Benn’s last two principles.

“To whom are you accountable?”

The General Secretary should not only be elected by an open contest at conference but they should be answerable to it as well.

I urge Party members and organisations to contact the NEC to call for such a democratic process in the election of our next General Secretary.

• For a model letter/motion on electing the GS, see Pete’s website.