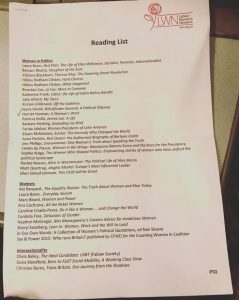 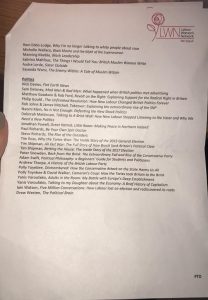 I recently came across a reading list used for the much-acclaimed Jo Cox Women In Leadership Programme (see above).

Some inclusions I very much welcome, such as biographies of Ellen Wilkinson and Jennie Lee: but the list has a heavy focus on women at the top of capitalist society. It focuses on the politics of women like Hillary Clinton, whose campaign received millions of dollars in corporate funding, serving a very different purpose to politics for women taking leadership in the labour movement.

Women in leadership can’t mean women leading class society and pushing forward the exploitation of their sisters. Instead, labour movement women can and must take the lead in presenting an alternative to class society.

Here are some suggestions to point the way. Obviously this list is by no means comprehensive!

Social Reproduction Theory: Remapping Class, Recentering Oppression edited by Tithi Bhattacharya
Is the Future Female? by Lynne Segal
Beyond The Fragments by Hilary Wainwright, Lynne Segal and Sheila Rowbotham
Marxism and the Oppression of Women by Lise Vogel
Dangerous Liaisons by Cinzia Arruza
Abolition Democracy: Beyond Empires, Prisons and Torture by Angela Davis
Your Silence Will Not Protect You by Audre Lorde
Close to Home: A Materialist Analysis of Women’s Oppression by Christine Delphy
Selected Writings by Clara Zetkin
Selected Writings by Alexandra Kollontai
Sex, Race, Class by Selma James
The Gentrification of the Mind by Sarah Schulman