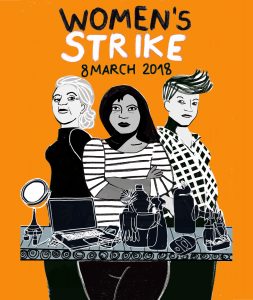 We’re looking forward to a wave of strikes this spring. 92% of staff at some FE colleges voted for strike action after being offered a paltry 1% payrise. The USS pension strikes called by UCU members at universities will aim to shut down over 60 university campuses across the country in February and March to stop the slashing of pensions. Workers at Picturehouse have got their union BECTU to announce multiple days of strike action in the coming months, including on International Women’s Day. Things are heating up as the winter fades behind us.

Struggling to win in the current climate of cuts and austerity is not easy and requires us to build new forms of solidarity and workingclass struggle. The traditional strategies of the industrial strike whilst productive, need to be expanded upon, encompassing those outside of traditional forms of employment and underemployment. To be able to win we need to reimagine what a strike can be.

The Women’s Strike Assembly calls our friends and comrades to welcome the opportunity to bring gender to the centre of our politics on 8 March – and experiment with what would happen women withheld their labour not just in the workplace, but in the home and on the streets.

Presenting as women brings all kinds of additional labour. Everything from the fact that we are expected to be pretty (trans women are often expected to be even prettier!) to the tiresome work of being expected to listen to our bosses patiently about their marital problems and never expect the same in return. Women’s labour is exploited in multiple ways and a women’s strike is about building the counterpower to fight around the multitude of issues facing women, non-binary and femme people.

The Women’s Strike is about more than just the withdrawal of our paid labour – it is also about recognising that women take on a disproportionate amount of unpaid work in the form of cooking, cleaning, caring and other tasks that are essential to the day to day functioning of capitalist society.

We also face a particular kind of violence and oppression that needs to be fought and organised against through an intersectional praxis. If you think everyone, regardless of their gender or identity should be able to collectivise their fight, striking at the heart of what keeps the system running – the heterosexual nuclear family – join the Women’s Strike on 8 March, in Birmingham, Cardiff, Edinburgh, London, or organise in your own city.

• Find out more at www.womenstrikeuk.org