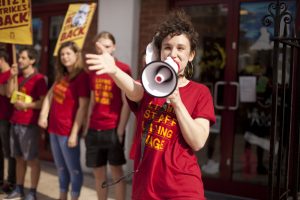 In the context of the abusive histories of Harvey Weinstein, Kevin Spacey, Gary Oldman and others, the world is – rightly – talking about the problems of powerful, entitled men, sexism and sexual abuse that are rampant in the film industry. But it doesn’t end at the big names. Thousands of women workers at the lower-paid end of the industry, cinema workers included, not only experience widespread harassment from customers and managers, but also an economic exploitation that is very much gendered. Low pay, precarious contracts and poor conditions are all things predominantly experienced by women workers, especially migrant women.

What we now know that International Women’s Day grew out of a wave of protest and action by working-class women in the early 20th century. Industrialisation had thrown millions of women into factories, domestic service and other work. Many occupations were gender segregated, and “women’s work” – such as textiles – was often in the most appalling sweatshops, with low pay, terrible safety standards, and long hours. But women workers were together, rather than isolated in the home, and better able to fight back.

On March 8 1907, women demonstrated in New York, demanding votes for women and an end to child labour and sweatshops. On March 8 1908, 15,000 women, mostly garment workers, marched through the city demanding shorter hours, better pay, union rights and the vote. In 1909, women shirtwaist makers in the USA staged a 13-week strike. The Socialist Party of America declared 28 February the first National Woman’s Day. In 1910, women chainmakers in Cradley Heath, in the West Midlands, struck for ten weeks to force employers to pay a minimum wage. Their strike even used the new medium of cinema to bring their fight to a wider audience.

In 1910 German socialist Clara Zetkin proposed to an International Congress of Socialist Women, attended by over 100 women from 17 countries, that “the socialist women of all countries will hold each year a women’s day”. The first International Working Women’s Day was held on 19 March 1911, with more than one million attending rallies in Austria, Denmark, Germany and Switzerland.

International Women′s Day has continued to be a focus point for working-class women′s struggles. It was Russian women striking for “bread and peace” on International Working Women’s Day six years later that triggered the 1917 Russian Revolution, forcing the Tsar to abdicate. 5,000 women demonstrated in London on IWD 1971, demanding childcare, equal opportunities and easier access to safe abortion. In 2014 cleaners from the IWGB union organised an International Women’s Day protest and event against outsourcer Mitie and its female CEO.

The feminist aspects of the Picturehouse strike go beyond just the demand for maternity pay. Jobs seen as “women’s work”, such as cleaning, nursing and caring, the service industry, secretarial work, have historically been underpaid as well as precarious, for both women and men n them. Supposedly “flexible” zero-hours contract jobs are more likely to be occupied by women working around caring and other responsibilities.

Strikes are about, but not just about, defending our rights at work in an immediate way. Workers withdrawing our labour is a political act, it is a rejection of the idea that our bosses should control our lives. We should be discussing the wider political issues too. Picturehouse’s parent company Cineworld made over £90 million in profit last year: why are they not taxed more? Why is the Minimum Wage so low? Why are companies not legally obliged to pay proper maternity and paternity pay?

Why is it that women do two-thirds of the world’s work, but only earn 10% of the world’s income, and own only 1% of the world’s property? The labour movement has not always been good at organising and fighting for the rights of precarious workers, or women workers, and the feminist movement has often neglected working-class women′s struggles. Our International Women’s Day strike aims to bring these two wings of our movement together.

We should revive the original spirit of International Women′s Day: to mobilise support for working-class women’s demands, and celebrate the contribution that women make to the struggle for human liberation. We need more like this. Other unions and disputes should discuss striking on 8 March in future years.