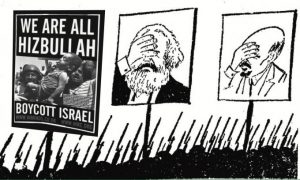 The left’s recent victories in Labour’s NEC elections, and Christine Shawcroft’s replacement of Ann Black as chair of the NEC Disputes Panel, prompted concern from some Jewish party members and communal organisations. Their fear is that an ascendant left will lead the party to take a softer line when investigating allegations of antisemitism, which some on the left see, or are alleged to see, as made in bad faith as part of right-wing attempts to undermine Corbyn. The extension of Ken Livingstone′s suspension from party membership, and debates around the selection of the party′s new General Secretary, have also given renewed impetus to debates around these issues.

Some of the furore around the NEC elections was misleading and unhelpful, undoubtedly motivated by a desire to bash the left. A now deleted tweet from the Huffington Post’s Paul Waugh immediately following Shawcroft’s election reported a “leak” that claimed an effective amnesty would be granted to those accused of antisemitism, who would have investigations into the complaints downgraded. Left-wing NEC member Rhea Wolfson quashed the claim as false, and it was soon withdrawn.

But if some have exploited such concerns for cynical reasons, the underlying issue should not be dismissed. The issue is composed of several strands, which cannot be easily disentangled from one another. There are procedural and administrative questions around how Labour should best handle investigations into allegations of antisemitism and other bigotries, and what action should be taken if and when such allegations are upheld. There are political questions around whether a specific variant of antisemitism exists on the left, and if so, what its roots are; or whether, as some claim, there is no specific “left antisemitism”, and any antisemitism that does exist on the left is merely an aberrant but statistically-inevitable expression of a bigotry that exists in wider society.

It is not the intention of this article to answer those questions in depth, but rather to sketch some general responses in the spirit of contributing to an ongoing debate. There is also an additional, separate but related, question of how Labour should relate politically to the Jewish community, and other ethno-cultural communities; for reasons of space, this article will not attempt to deal with that at all.

Although there are different views amongst Clarion editors and supporters, I believe “left antisemitism” is a real and discrete phenomenon, with roots both in the 19th-century “socialism of fools”, that equated Jews with capital, and in more recent Stalinist politics. (For more on this, see an article I wrote here.)

While it is possible for allegations of antisemitism, or indeed any bigotry, to be instrumentalised or even, sometimes, fabricated, for factional ends, treating complaints of antisemitism as universally motivated by bad faith and a desire to attack and undermine the left is part of the problem. Jewish and other members of the party have an absolute right to have complaints investigated thoroughly and impartially, based on the best practises of due process. An ascendant and increasingly hegemonic left must ensure that this is the case. Those on the left who deny there is any issue whatsoever with antisemitism, and that all such complaints are part of a right-wing, or even “Zionist”, conspiracy against Corbyn, should be marginalised on this issue.

Objections have been raised to certain cases concluding by recommending “training”, rather than simply expelling, or disciplining in some other way, the accused. I don’t wish to comment here on individual cases, and investigations of which I have obviously not been a part. However: to establish a precedent whereby anyone found guilty of any expression of antisemitism is automatically expelled from Labour would be wrong.

Firstly, it would be to respond solely by bureaucratic and administrative means to what is, at root, a political problem. Expelling individuals does nothing to dismantle the ideological infrastructure of left antisemitism, which must be confronted head-on, via debate and political education. Until that infrastructure is dismantled, until the common sense of the left on a whole range of questions related to this issue is replaced with a different one, people in left milieus will pick up left antisemitic ideas. That is not to excuse those ideas, or trivialise their impact, but it is to assert that only a political-educational campaign to uproot them, rather than a blanket policy of summary expulsion for anyone found guilty of expressing them, will do.

Does the presence of people holding left-antisemitic ideas represent a threat to the safety of Jewish members, such that summary expulsion is the only reasonable response? A nuanced but important distinction should be drawn between racialised antipathy to Jews, and the politically-constructed implied hostility inherent in left antisemitism. We cannot treat people guilty of, for example, recycling left-antisemitic tropes about Zionism as if they are hardened, ideologically-convinced racists. We should treat them as people with dangerously mistaken ideas about certain aspects of politics, and attempt to convince them of different ones.

There are, of course, grey areas throughout all of this. It is possible for left antisemitism to shade over into more straightforward racist hostility to Jews that, in some cases, it may not be possible to shift even through sustained argument and debate. In certain cases, where it is clear an individual is straightforwardly unwilling to engage in any discussion about what might’ve been wrong with, for example, their repeated social-media posts about Rothschild bankers, expulsion should obviously be on the table. In my view, the sanction against Ken Livingstone is also merited; he is someone who, over a number of years, has proved to have a kind of political obsession with Jews and Zionism (over and above any other form of nationalism), about which he has a clear fondness for ahistorical conspiracy theories.

The Labour left is febrile and in great flux. Socialists concerned about this issue should throw themselves into it, including into Momentum, and attempt to win the arguments.

A comparison with other bigotries, although, like all analogies, limited, may be instructive. Sexism undeniably exists within the Labour Party, wider labour movement, and on the left, including what are arguably specifically “left” variants of sexism: the implicit equation of machismo with militancy within the trade union movement, for example, or the historical sidelining of women workers’ struggles. But it is rare to find anyone advocating summary expulsion as the default sanction for anyone found guilty of sexism. Rather, feminists within the movement have undertaken to confront sexist ideas and cultures, and replace them with better ones. While disciplinary sanction, up to and including expulsion, may be appropriate in some cases, the emphasis is on the transformative potential of confronting and uprooting sexist ideas.

A similar approach should be adopted to antisemitism on the left. Those who agree on the nature of left antisemitism should unite to confront it – via written polemics, debates, publishing articles and pamphlets, meetings, workshops, educational events… in other words, via political-educational campaigning activity. Our politics require a faith that even deeply-embedded reactionary ideas held by fellow members of our movement can be uprooted and changed. That faith, rather than the bureaucratic-administrative demand that the problem be kicked out rather than confronted, should inform our next steps here.