Reports on two big gains for the left in the heartland of right-wing faction Progress, in Lambeth and Southwark, South London. 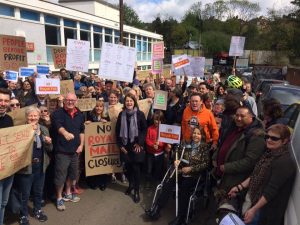 Hot on the heels of big gains by the left in Streatham (see below), the left in another Lambeth CLP has gone one step further. This week the left in Dulwich and West Norwood (DAWN) were elected to the key positions on the CLP Executive Committee at a packed AGM of over 200 delegates.

This would be a tremendous achievement anywhere, but even more so in the heartland of Lambeth’s Progress-led council. The DAWN left has built up through hard work and campaigning around the Picturehouse Living Wage struggle and Ritzy victimisations, the campaign to defend Central Hill estate and the Save Lambeth Libraries campaigns, as well as a lot of campaigning during the general election.

At the AGM of Streatham CLP on 22 February, the Progress-dominated leadership held on to every officer position by a clear margin. But the meeting was far from being more of the same: the left-wing bloc organised by Streatham Labour Left has virtually doubled its representation on the General Committee.

Last year, the left had about 30 delegates to about 100 for the right. This year, we had 60 while the right remained static, taking our proportion of the GC from something like 23pc to something like 38pc. In two years the vote our candidate for chair received has more than quadrupled.

In addition the left now holds four of the eight ward secretaryships and all the major positions apart from secretary in a fifth ward.

These results are all the more impressive when you consider how well entrenched and committed Progress and other right-wingers are in Streatham (in addition to a Progress-dominated council we have a Progress full-timer and the Labour First national organiser based here, as well as a full-timer for the “steel union” Community); and also the many cynical tricks and manoeuvres they used to prevent the left from winning more delegates.

This included preventing the establishment of a Women’s Forum in the CLP ahead of the AGM, and refusing to allow election of a Women’s Officer, both in clear violation of Labour Party rules.

Streatham Labour Left will continue to build our strength in the party while campaigning for Labour elections victories as well as on other issues. We are more than happy to come and speak to other constituencies to explain how we have made progress against Progress! If it can be done here it can be done anywhere.

• We hope to carry more coverage of the victory in DAWN soon.