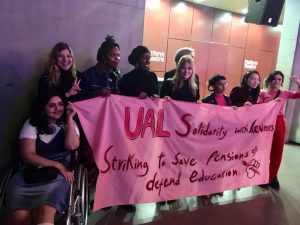 When New Labour introduced tuition fees in 1998 they also willingly ushered market forces into higher education learning. Since then, the grip of the market on the education sector has steadily increased. The presence of market forces was most visible in 2012 when the coalition government tripled fees to £9,000. The recent UCU strike is simply one more case of the market tightening its grip on higher education.

Students are understandably angry. Just about all UK universities now set their fees at £9,250 whilst the current 14-day strike will affect over 1 million students across 64 universities.

However, this anger should be directed at those actors which further seek to turn universities into businesses and students into customers. The same actors which are complicit in rising tuition fees also want to make academic’s futures more precarious. The insistence of Universities UK to push through reforms to the USS pension will see some UCU member’s pensions reduced by £10,000 annually. This will leave many of academic’s pensions lower than subsistence levels. Whilst just this year the chief executive of the USS received a pay rise of £82,000.

Students should be angry and deserve to be angry. Angry at the unjustness of a system which charges young people up to £9,250 annually to continue their educations; angry at paying an interest rate on those loans of 6.1%; angry at an attempt to undermine the hard work of their lecturer’s and academic staff; and angry at a university system which pays vice chancellors six-figure sums.

Precisely, what students should be angry with is the marketisation of higher education. Therefore, it is important that as students we channel our anger towards the right actors. Don’t be angry with your lecturers be angry for them. Write to your vice chancellor’s expressing support for academic staff and/or reimbursement of tuition fees, post your support on social media using the hashtags #ucustrike and #studentstaffsolidarity or get involved locally on the picket lines. Don’t let the same actors that have been complicit in commodifying education use students as leverage against UCU members.