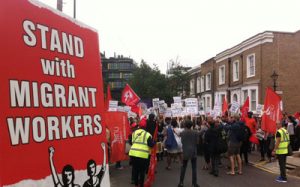 Our editor Michael Chessum is an organiser for the Labour Campaign for Free Movement and Another Europe is Possible. He spoke with Sacha Ismail about Labour and Brexit.

What’s your view on calling for a second referendum?

Brexit is going to be a disaster – it’s going to mean the stripping away of rights and freedoms, and big attack on democratic process, attacks on migrants’ rights, and so on.That is highly likely to happen before Labour gets into office. So Corbyn will inherit that, along with a tanking economy.

And well, if your aim is to stop Brexit from happening, a second referendum is straightforwardly the only way that that can be achieved. Having parliament block EU withdrawal without a referendum would create an enormous backlash, and a backlash on entirely the wrong terrain. A portion of the population – including loads of people who voted Remain — would regard it as an establishment stitch up. And we’d be part of the “establishment” in that scenario, leaving the far-right to clean up.

Can we stop Brexit by making it the subject of a general election? I think that’s a dead end – mainly because Labour would never put stopping Brexit in its manifesto, and also because any victory in that election would almost certainly get less than the 52% of the vote which Leave achieved, essentially replicating the problem that you get by blocking it in the Commons.But also, you just can’t make elections about one thing: people vote for their own reasons, and parties would have to produce a full manifesto.

There’s another scenario, and not a completely impossible one, in which Brexit doesn’t happen.That’s where the Tories fall into such disarray that they can’t enact anything, and they themselves choose to keep Britain in the EU rather than crash out over a cliff. That’s not a bad scenario for us, but it’s not one we have any control over.

The Labour leadership’s current strategy is to say “free movement will end with Brexit” – not that it should end, but just that it’s automatic. That’s handy if you’re trying to dodge the Brexit debate and talk about other things, but it’s transparently not true. We could stay in the EEA, and we could have a bilateral agreement with the EU that includes free movement.

This is the critical issue at the moment. Corbyn’s Labour is in danger of endorsing the biggest expansion of border controls in recent history. That’s what ending free movement means, no matter how you dress it up. We need to be clear and direct that the solution to society’s problems is investment and socialist policies, not borders. These things ought to be basic principles – but a lot of left-wingers are now changing their ideas to fit political expediency.

Diane Abbott is now launching a principled intervention into the debate on immigration, but to really win free movement as party policy we need to build bottom-up pressure, via groups like the Labour Campaign for Free Movement.We also need to campaign on free movement on a “Brexit neutral” basis (so including Lexiters), so that it’s clear that free movement isn’t purely bound up with EU membership.

We seem to be hearing more of the argument that being in the Single Market rules out,for example, nationalisations. What would your response to that be?

It wasn’t the EU that privatised our rail or anything else — it was a British government. And loads of the rules on trade and privatisation actually come from bodies like the WTO. Most countries in the EU have a far greater degree of public and common ownership in their economies than we do.A socialist government should absolutely be willing to defy Brussels in order to implement its programme. Come back to me when we’re in that position, not when we’re running of the edge of a cliff led by Liam Fox,who wants to scrap all the “red tape” and flog everything to American capital.

There’s an argument that pushing an anti-Brexit or more anti-Brexit position divides Labour and plays into the hands of the party’s right.

Brexit is an awkward question for Corbyn’s leadership. Yes, the right of Labour are weaponising Brexit – though many don’t actually like free movement. Left-wingers should build our own distinctive, principled intervention into the debate. Cynics and hacks will say that we’re “backing Progress” for doing that. But if you think that left-wing activists shouldn’t use their brain and come to independent positions,we should all pack up and go home.

Rank-and-file left activists who want to shift the party should link up with organisations like LCFM and Another Europe is Possible and start coordinating and pushing harder.