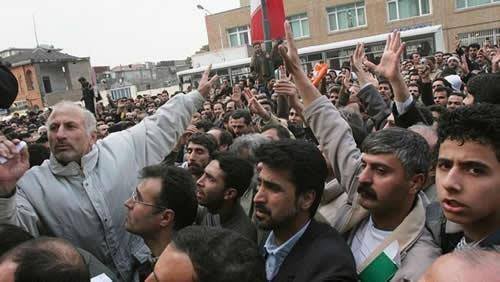 Before we got onto our packed agenda of business, Lewisham Momentum’s January general meeting heard from Iranian socialist activist Kaveh Abbasian. Kaveh explained the historical context of Iran’s 1979 revolution, the nature of Iran’s society and regime and the current struggles, and why the international left has a duty of solidarity.

Speaking as a Labour and Corbyn supporter, Kaveh also sharply criticised Jeremy Corbyn and Emily Thornberry’s stance on Iran. Unsurprisingly, there was a lively debate.

How do we combine solidarity with the protesters and against repression with firm opposition to Western military threats and economic sanctions? How do we respond to the presence of monarchist organisers in the protests? Wouldn’t a strong statement by Corbyn be seen as outside interference in Iran? And so on.

Kaveh argued that there is no contradiction building solidarity and opposing military intervention; and that whatever the tactical considerations, Corbyn and co’s basic duty is to tell the truth and support the worker and student activists who are being repressed. He also pointed out that the Iranian regime is itself imperialist, particularly in terms of its appalling role in Syria, and that we must oppose all imperialisms.

Kaveh stressed the neo-liberal nature of the Iranian regime, and there were questions and discussion about its economic policies and about social and workers’ struggles in Iran. One comrade asked whether it wouldn’t be better to concentrate on capitalism and not talk about Islamism. Kaveh explained how the Islamic Republic is a theocracy as well as a neo-liberal capitalist state, and how this gives it extra weapons in its ability to suppress the population.

Another comrade made the good point that the British government has been surprisingly quiet about the protests, because far from wanting war with Iran it hopes to do business with it and has its eye on contracts. Another argued that we must not repeat the mistake some on the left made by failing to support workers’ movements in the Stalinist states and allowing the right to become their champion.

By the end I think a big majority agreed with the need to build active solidarity. A number of us will be putting The Clarion’s model motion on Iran in our ward meetings. You should invite Kaveh or another Iranian comrade to your Momentum meeting too!

More:
• Corbyn and Thornberry should back workers’ rights and democracy in Iran
• Model motion on Iran for CLPs