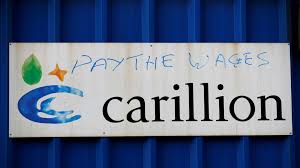 Of the assets cited in the last balance sheet from Carillion, only 5% were saleable items –
buildings, equipment, financial paper.

The rest was a notional “goodwill” total, computed by assigning asset values to the contracts which Carillion held from public authorities and others.

Now, when the financial pass-the-parcel stops, there is almost nothing to be sold off to pay Carillion’s workers and suppliers. All the proceeds of Carillion’s years of prosperity have been siphoned off in big dividend payouts to shareholders – bigger year after year, until 2016 — vast bonuses and pay deals for the bosses, and buy-outs of other contractors to expand Carillion’s scope.

When they saw that the giddy whirl was wobbling fatally, in the middle of last year, the top bosses bailed out, and tried to amend the company rules to ring-fence huge leaving payments for themselves in any circumstances short of outright conviction for fraud.

They can’t now get away with drawing further payments, but they had already drawn enough to make them well-off for the rest of their lives.

Carillion’s workers, whether employed directly or through subcontractors, got no such protection. Carillion’s successes and profits were never profits for them, but products of their work being made insecure, gruelling, ill-paid.

In order to pump out those bonuses and payouts, in an ever expanding spiral, the system drives for profit with scant regard for the effects in trashing the environment.It cuts and shrivels social provision – health, education, social housing – in order to help increase the revenues of the rich. It degrades human life by driving it into a competitive rat-race. It is
a system of inciting each individual to develop sharp elbows and use them to get ahead of others.

The Carillion episode, like the financial crash of 2008, shows that the system works to privatise profits and socialise losses. It works that way in boom as well as in slump and crisis.

This system has given us the Carillion collapse, the NHS crisis, and the years of economic depression since the 2008 crash.

To put a pause to austerity, to take some more taxes from the rich to mend social provision, is a start in the fight back. The newly-invigorated labour movement should also do more.

The alternative to capitalism is social ownership of the banks and industry, workers’ and democratic control, solidarity and social provision as the guidelines for the economy in place of profit – in short, socialism. Let’s organise now to fight for it.