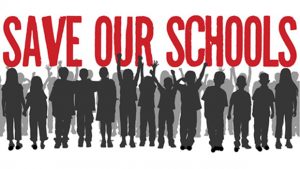 As CEO pay in education rises to above £400k, 91% of our schools face cuts

This latest pay rise sees a £25k increase since 2015, whilst the Harris chain is forecast to lose over £8 million funding in total across its schools by 2019 (see here.)

Harris, the well known vanguard of the privatisation of Public Education in the UK, is by no means the only academy trust where senior management pay is increasing, during a period of austerity in our schools.

Ark Academy Trust, currently operating a £4.1 million deficit across its 35 schools, recently awarded this financial mismanagement by increasing its managing director Lucy Heller’ remuneration by 2%, leaving her with the sum of £209,679 a year (see here).

The large salaries of senior managers within the academies world is unacceptable during a period of cuts. 91% of our schools will face funding cuts by 2019, (the combination of successive Tory governments austerity in schools and funding formula changes). For more see schoolcuts.org.uk

The inappropriate behaviour of Academy chains in paying these large salaries is starting to turn to anger, as teachers (mostly limited to a 1% pay rise) and the wider public realise these salaries come from tax payers money, meant for the education of our children.

An independent regulator for deciding the remuneration of CEO/senior manager’s pay in the public sector could be suggested. However, like the regulator for MP’s pay, this will not stop large increases for the few, whilst the many face pay cuts. A regulator will not be enough.

A Corbyn led Labour government has to end the disparity between manager’s pay and workers pay even within the public sector.

Legislating a cap between public sector worker and public sector senior manager will be essential, what this cap should be is something that needs discussion.

The reality is that academisation, dreamed about by Blair and Adonis whilst playing Tennis, has ultimately led to this mess. Although, Tory governments have expanded academisation, the privatisation of public education.

The National Education Service in the 2017 Labour election manifesto (https://labour.org.uk/wp-content/uploads/2017/10/labour-manifesto-2017.pdf) is a welcome commitment and signals the start of a discussion about the future for education.

What the national education service looks like still needs defining. We must ensure we:

1. Re-nationalise all schools, end to academisation – this would mean the local authority takes back control, to coin a phrase.
2. Demand the repayment of excessive salaries of chain CEO’s and all third party transaction profits made by their families.
3. Take all land given to Academy Trusts/free schools back to local authorities.
4. End private schooling in England and Wales -support comprehensive education for all.
5. Abolish STRB (school teachers review body) – replace it with a new National Teachers’ contract that applies to all through collective bargaining of all trade unions in education.
6. End performance related pay in education-our learners should be educated by those not concerned about objectives and targets.
7. A minimum immediate 5% pay increase for Teachers and educational workers, to try and start to win back wage erosion of the last 8 years.
8. Invest in education- end cuts to our schools and the regressive National funding formula of this government, save FE and HE.
9. Remove edu-business from public education-these private capital vultures continue to take money away from children’s education.
10. Trust the profession- make education about learning and not about the exam factory culture.
11. End tuition fees- ask the top 250 FTSE companies to pay a levy towards higher education.

These steps are a start, and ultimately the profession and its trade unions should define the future.

My hope is that Labour is serious about ending privatisation and making education focused on public good, not private profit.