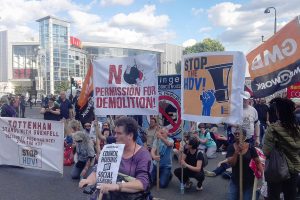 We’ve been sent this motion passed unanimously by Evelyn ward in Lewisham Deptford (it will now go forward to the CLP). It seems to us a bit of model. Why not adapt and put in your ward/CLP?

We were extremely disappointed to see that Steve Bullock [Lewisham’s outgoing directly elected executive mayor] had signed the letter from a number of Labour local authority leaders condemning the NEC for its vote to raise concerns about the Haringey Development Vehicle “redevelopment” plan.

In general our council leaders have been pretty quiet in terms of protesting against cuts to local authority budgets and virtually silent in terms of demanding funding is restored, let alone campaigning for it. It is therefore even more odd to see many of them so vocally speaking out to condemn the NEC for seeking to deter a disastrous scheme which aroused an entire community against it and become a major embarrassment for the party.

We ask Steve to reconsider his position. We send our full solidarity to the comrades in Haringey Labour who played a central role in defeating the HDV.

We call on the whole party to vocally demand and campaign for the full restoration of the funding local authorities have lost since 2010.