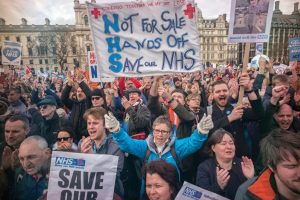 For Clarion issue 12, we interviewed Alex Nunns, author of The Candidate. In that interview Alex made an argument about Labour and the NHS which we think is worth republishing:

“The NHS should be [the pivotal issue of 2018]! It’s an absolute disgrace what is happening to the NHS. The trouble is that it’s always quite hard to politicise it. People might generally associate its problems with the Tories, but it doesn’t seem to have much impact on people’s voting intentions.

“I think the media commentators buy that argument [that the NHS can never meet the scale of health needs] and so it has an impact on the debate.

“But when the press make the case for an insurance based system — arguing that the NHS created in 1948 isn’t fit for purpose — it has no purchase at all with most people.

“Sadly the alternative argument, the socialist argument for the NHS, isn’t put forward with any force… What you tend to hear from the Labour health team is funding; we need more funding, which of course is true. But we also need to address the fact that the NHS has been gradually and deliberately reformed so more and more money is diverted to the private sector.

“I think the Labour Party is really missing a trick; if they put forward strongly the socialist case for the NHS and the way it should be organised, I think it would be really popular.”