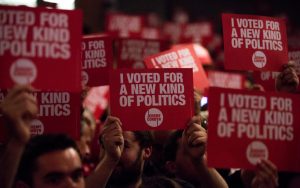 Previous left-wing movements in the Labour Party and trade unions have not been run as Momentum is today.

All of them, or all of any scope and durability, have had conferences, elected committees with their deliberations open to scrutiny and check by the members, and some form or another of democratic voting by their members on future directions.

A number of people prominent in the leadership of Momentum have spent years or decades arguing and organising for such democratic mechanisms.

And now Momentum operates more like an NGO. Essentially all decision-making power is in the hands of its paid officials, in its office. Why?

In the dismal years of the Blair-Brown New Labour regime, and of trade unions continually in retreat, many left-minded people came to see left-wing NGO campaigning — an office, a grant, a few paid workers, a website — as the gold standard of left-wing activity.

Blair and Brown remodelled the Labour Party, so that decision-making centred in the “Leader’s Office” rather than in Labour Party conference or even in the National Executive, and as a whole social layer of advisers, researchers, aides, PR people, and wonks came to underpin the whole regime. Many activists objected. But over the years the new regime imposed itself as the new normal.

In 2010-1, some of us were campaigned (unsuccessfully, as it turned out) to use the Labour Party democracy review announced by Ed Miliband to get reforms. A current “Corbynista” Shadow Cabinet member, then not even yet an MP, attended one of our meetings.

She wanted democratic reform. Of course. But, she said – evidently shocked – there could be no question of making Labour Party conference really a decision-making centre. The media would report and exploit debates and divisions. We must find subtler, more controlled, ways of doing things.

When Momentum was launched in late 2015, the initial plan — presumably shaped and shared by a relatively wide “Corbynista” inner circle — was for no conferences, and instead an NGO-type operation, possibly with occasional e-consultations.

Momentum members objected. Stumblingly, in early 2016, Momentum developed some elected committees, and an apparent agreement to develop some democratic structure.

Those of us who wanted democratic structures were very open to compromise about the details. But months of dispute over meetings cancelled, decisions ignored, and reluctance by some to concede any “real-life” component of democracy alongside promises of e-OMOV, wearied the membership.

And then came the January 2017 coup, in which all the existing Momentum structures (other than the office) were abolished, and a new constitution imposed in which, as we have found, even the element of e-OMOV so loudly advocated in previous months became notional.

The coup-makers, evidently, were as alarmed at the prospect of a Momentum conference which would have open debates, and might have political autonomy from the Labour leadership on issues like free movement, or support for industrial disputes like Picturehouse, as the future Shadow Cabinet member had been in 2010 at the prospect of an openly-debating and decisive Labour Party conference.

Momentum did good work for the June 2017 general election with its app to recruit new campaigners, and has gained credit for that. But the task of today is to remake the labour movement as a lively, active, engaged, responsive, and politically-educated movement. That cannot be done without democracy both in the broader Labour Party and in the Labour left.