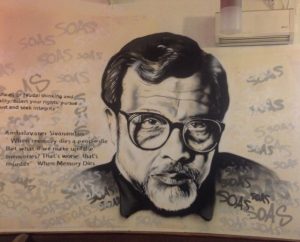 Political theorist (and novelist) Ambalavaner Sivanandan died in January. Rachael Wirth and Priya Rajani assess his contribution to the left.

Ambalavaner Sivanandan was a Sri Lankan Tamil, born in Colombo in 1923. The son of a postal worker, he went to University in Ceylon but left Sri Lanka in 1958 at the time of the anti-Tamil riots and arrived in Britain with his family  to witness the Notting Hill race riots. These experiences had a profound effect on him and he threw himself into the the activities of the burgeoning anti-racist movement that grew within the Afro-Carribbean community in the UK.  As a result of this activism he began writing as his way to fight racism and bring greater understanding of its roots in Imperialism and colonialism.

Sivanandan got a job as librarian at the Institute of Race Relations and began overhauling the library bringing in more overtly political texts, newspapers from black civil rights movement, the Black Panther party, South African community papers and more.

Sivanandan was part of a challenge to the existing political trajectory of the Institute of Race Relations which saw most of the employees and members opposing the management board. When it won, he ended up as the new director. The IRR moved from being a government advisory organisation to being a campaigning group, supporting communities and victims of racist violence and discrimination. Sivanandan founded  the IRR journal Race and Class and authored some pivotal pieces which reframed the understanding of the black experience in Britain. The 1976 essay ‘Race, Class and State’ was the first comprehensive attempt at a class analysis of the black experience and in this work he also created the concept of state structured racism.

He wrote extensaively on Third World politics, the link between global capitalist exploitation of the Third World and modern day racism in Britain and elsewhere. His concept of the struggle against racism as being inherently bound up with the struggle of one class against another across the world brought a much needed Marxist understanding to the nature of racism and how to fight it.

For Sivanandan ‘black’ was a political positioning. He recounts coming to the UK in 1958 and hearing about the beginnings of the Notting Hill riots. He expressed an intention to go and see what was happening and was told by fellow Sri Lankans that its was to do with the ‘negroes’ and nothing to do with them. Sivanandan rejected entirely the retreat into separate ethnicities and sought to understand the united experience of those who faced racism.

Speaking in the United States, giving the inaugural lecture at the new Race Institute at Berkeley, he reminisced:

“I was just a petty librarian. I gave the inaugural talk and when I talked I said black. They didn’t understand it. They said, ‘No Asian in this country calls himself black.’ I said, ‘That’s the contribution that Britain has got to make to your struggles because we have still a Third World conscience and black for us has become now struggles in Britain, where Afro Caribbeans and Asians came together on the factory floor or in the community and they fought as a people for a class and a class for a people……. And so I said, ‘The Black Power movement doesn’t have a Third World perspective. That is the thing that we bring to you. And black is a political colour, not the colour of your skin. When you mix up slavery and colonialism and racism and Christianity and all that, the conquerors and all that stuff, the colour of oppression today is black, like the colour of rebellion is red.’’

Sivanandan was a pioneer in explaining the nexus between race and class. He continued to write throughout his life, always reiterating the need for a Marxist analysis of race that placed it within the context of class and capitalism. He was scathing in his appraisal of emerging theories of postmodernism and the post-communist ‘New Times’ movements in the 1980s which promoted a retreat to identity politics and away from class struggle.

His works are as valuable today when some comparable forces hold sway  in our movement.