London Young Labour conference, attended by well over 300 young members, leaned strongly to the left. Momentum-supporting candidates won a strong majority on the new committee. What should the left fight for LYL do in the period ahead?

3-400 is an improvement, but a small percentage of the 15,000 young members in London – and mostly people well into their 20s, like me. Generally, only a pretty small minority are active. To change that and bring in a wider range of young people, we need proper local groups, as centres of campaigning and discussion, at least in every borough and preferably in every CLP. More activists are starting to build those groups, but with no encouragement from either LYL or from the party structure. Moreover this is not something that even most of the left talks about much. If it was talked about it more we could surely, with the huge youth support for Labour that exists, make progress fast. LYL should push for this, including by organising a series of events to encourage and train people to build groups and share best practice.

LYL needs to work hard to become a visible presence on demonstrations, in student occupations, on picket lines, using its weight and voice to support these struggles and drawing in new members and activists as a result. Let’s start with support for the UCU pensions strike. 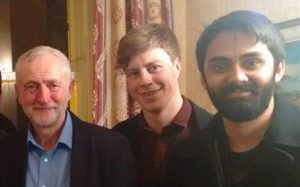 Omar is one of the ones with a beard…

To do these things we need a political school for activists, not a school for careerists, whatever language that careerism is dressed up in. We need a comradely, well functioning democracy in LYL. I previously sat on another committee (NUS NEC) dominated by stifling cliques and a culture of bullying and shutting down debate, on “left” as well as right. I very much hope and will fight to ensure that LYL’s committee is not like that, and that instead it models democracy, civilised debate and comradely cooperation to the wider movement. I challenge our new chair to help make sure this happens. The way LYL conference was run was not encouraging. The Stalinist politics and, worse, Stalinist methods which are gaining a foothold in our movement needs to be challenged.

That means training people in activist and organising skills, but it also means training critical thinkers. Replacing one not-to-be-questioned orthodoxy with another orthodoxy will not be an improvement. We need a culture where people feel empowered and confident to express disagreements and challenge received wisdom. We also need people who think of themselves as anti-capitalists and socialists to argue explicitly for bold socialist ideas and not limit themselves to the dominant consensus in the movement – which is what I will be doing.

This is an easy buzz phrase – the test is in actually doing it. Even now, when strikes levels are low, there are plenty of struggles to support – Picturehouse and McDonald’s being the obvious ones waged by mainly young workers. LYL’s record on this, and the left’s within it, has been limited in the extreme. We need to change that, making championing these struggles (and also drawing in members and activists from them) a priority. We also need to organise training events so we can share skills from these comrades to train a wider layer of young members to organise at work. This should go alongside strong political campaigns for a £10 an hour minimum wage, banning zero hours contracts and repealing all anti-union laws.

LYL conference voted, absolutely overwhelmingly, to campaign against a hard Brexit, for migrants’ rights, to defend free movement and to work with the Labour Campaign for Free Movement (LCFM). We need to make those things happen, even if some of the new committee are not very enthusiastic about it – both because it was a democratically made decision (regardless of whether some people decided not to express their opposition) and because it is right and essential. Finding ways to work with the LCFM to push for a strong stance on migrants’ rights in the party and mobilising for, for instance, the campaign against immigration detention would be a good start.

We need to be a voice for democratic transformation of the party, pushing at the limits of the Democracy Review for really radical reforms. That must of course include radical democratisation of YL and Labour Students. At the moment there is an uncritical adulation of “OMOV” (individual balloting of all members) on the left – this needs proper discussion. And fighting for democracy must also include standing up to demand the reinstatement of those unjustly suspended or expelled – as a number of excellent young activists in London have been.

Let me know what you think! Get in touch: omarraii12@gmail.com