Around fifty people attended a public meeting: ‘Partnership not academisation at Childeric’ on Tuesday 30 January. The audience comprised a large number of workers from the school, some parents and labour movement and anti-academy activists. We heard from GMB and NEU activists as well as from local councillor Joe Dromey, and a statement from Vicky Foxcroft MP. All were clearly and vehemently for the school remaining a local authority school.

A Multi-Academy Trust, based close by in Southwark has approached the leadership of Childeric Primary School, in New Cross, Lewisham wanting the school to join their MAT. The leadership and some of the teachers at the school feel Lewisham Local Authority has poorly served them. This is based on a mixture of the problems all schools face due to cuts and some genuine failures on part of Lewisham education. 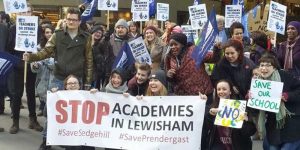 The fire last time: how Lewisham students and workers stopped academies in 2015

There was a genuine dialogue at the meeting where people argued that the solution was not joining a MAT but joining together to improve education in Lewisham. It was also pointed out that there was no more money for the school by becoming a MAT and the only way the MAT would deal with the pupils requiring more resources was to remove them from the school. At the end of the meeting several people who were members of the school community said their views had shifted against academisation.

Lewisham has managed to keep the vast majority of the schools under local authority control. This is due to campaign by unions and the labour movement – in particular a strike-driven campaign in the Prendergast schools in 2015, also involving student walk outs and protests. This was followed by strong campaigns in the local Labour Party when the council flirted with further attempts at academisation but was pushed back by the strength of members’ feelings.

The situation is now different with the council saying it rejects academisation and Lewisham Labour relatively united on the issue. A motion on Childeric at Lewisham Deptford CLP’s GC passed unanimously.

Parents from Childeric, supported by the local councillors, are now urgently seeking a meeting with the school governors to discuss their concerns. The unions have written to the head and chair of governors asking for clarification over the consultation process. A petition calling on the governors not to academise has been launched and is rapidly gaining signatures.