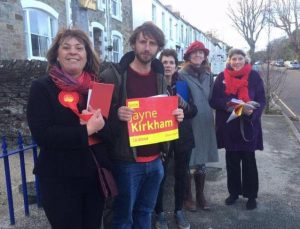 The Labour Party has confirmed its reputation as an insurgent force in Cornish politics with a resounding win in the Falmouth Smithick county council by-election. Labour increased its vote share from 40.3% to 61% adding nearly 150 votes to its tally in the 2017 elections.

The by-election was called after the sudden death of Candy Atherton who was Cornwall’s most prominent Labour politician. Elected as MP for Falmouth and Camborne in the 1997 election, Candy was loyal to Blair’s government but nonetheless secured EU funding for Cornwall resulting in millions of pounds of investment. When she lost the 2005 election Candy, to her credit, turned her attention to local government and organising the local party. Much of Candy’s vote was a personal vote for an effective politician.

The big shift in the 2018 election was the student and youth vote, inspiried by the 2017 general election campaign. Around one third of Smithick is student accommodation and there is a very high turnover of voters. Part of our job in the local party is to convince the students to register to vote in Falmouth, rather than at home, where their vote could make a difference. For a winter by-election we saw very little drop off in voter turnout 36.8% in May 2017, 31.1% in February 2018. Much of this must have been younger voters inspired by the Labour message at the general election.

The candidate, Jayne Kirkham, was the Parliamentary candidate in the 2017 election. She was up against a prominent local Lib Dem activist and a Tory with a penchant for sharing terrible Nazi jokes on social media. The final vote was Labour 643, Tory 184, Lib Dem 184, Green 57.

There was support from across the party from Progress-types with their “Clause 1 Socialist” badges, to mobilisations from Camborne and Redruth Momentum and Truro Momentum. However, after the Momentum candidate lost the selection, there was notable lack of activity from some prominent Falmouth Momentum activists, many of whom hold senior officer positions within the branch and CLP. When challenged, the inactivity was justified on sectarian grounds.

The campaign was run extremely effectively by an experienced Labour party activist on the more moderate wing of the party. The result of the sectarianism was that less experienced “left” activists did not get to watch and learn from an effective organiser. Throughout the party, there are key people on the right and left who know how to do effective electoral politics (in some respects). The serious left should learn what we can from these people, not stand aloof.

For the left in Cornwall, Labour’s victory in this council seat makes general election success all the more likely. Cornwall is one of the poorest parts of the country and is part of “left-behind Britain”. It is natural Labour territory. Yet for a century and more, the Liberals have been able to campaign on the basis that they are the only party that can defeat the Tories in Cornwall.

The 2017 general election result and this by-election result show that Labour is now the “tactical vote” in Cornwall. This fact, together with our ten-fold increase in membership, should mean that the Cornish Labour movement returns at least two MPs to Parliament at the next general election. If we step away from sectarian intrigue and towards a bold socialist agitation then we may win more seats.

In the next few weeks Truro and Falmouth will be selecting a prospective parliamentary candidate. We need a left candidate that can unite the party and lead that socialist agitation.