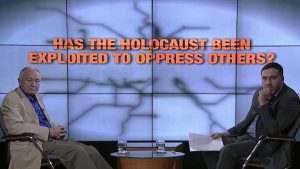 Alex Comiskey, Denton and Reddish CLP, gives his opinion on the continuing controversy around Ken Livingstone.

In January, Ken Livingstone decided to mark Holocaust Memorial Day by appearing on the state propaganda channel of the Iranian dictatorship, Press TV. At a time when thousands of workers have taken to the streets to protest against the Islamist regime, with hundreds killed and many more imprisoned, Ken chose to appear on the channel to discuss the question: ‘Has the Holocaust been exploited to oppress others?’

As the show’s host Roshan Muhammed Salih repeatedly linked the ‘Zionist lobby’ to the Holocaust and questioned the numbers of Jewish people murdered, Ken doubled down on the very lie that has seen him suspended from Labour in the first place, that Hitler “supported Zionism before he went mad and ended up killing six million Jews.

Others have picked apart this historically revisionist slander in great detail, here it will suffice for me to say that the claim is demonstrably false, it emboldens anti Semites and belittles those who suffer from poor mental health. For him to repeat the claim is breathtaking, but to do so on the state media of an institutionally anti-Semitic dictatorship, that is already banned from British airwaves, shows us yet again the kind of ‘socialist’ that Ken Livingstone really is.

You would think that following his year-long suspension from the Labour Party for perpetuating anti-Semitic lies regarding Nazi-Zionist collaboration (and subsequently being barred from holding office for another year), that Ken might show clearer judgement in his media appearances. However, to assume such judgement would be to give the man far more credit than he deserves.

Ken Livingstone has a long history of anti-socialist and regressive behaviour, dating back to the 1970s. Those familiar with the left during this era may have heard of the Workers’ Revolutionary Party, a Stalinist sect masquerading as a Trotskyist group, as well as their leader Gerry Healy. Healy was a quite despicable thug who was ejected from the party for the sexual assault of its members over many years. He led the group as it’s newspaper The Newsline carried overtly anti-Semitic propaganda and took money from both Saddam Hussein’s Ba’athist regime and the Libyan dictatorship of Muammar Gaddafi.

As you might imagine, following the emergence of these facts, Gerry Healy was ostracised by the British left and faded into obscurity. However, at his funeral in 1989, there was one ‘big beast’ of the left who not only attended but spoke kind words about the man and the quality of The Newsline’s journalism, Ken Livingstone. Livingstone claimed that Healy had done no wrong and that the claims against him of sexual assault were the work of MI5. It was nothing more than apologism, a slap in the face for all the victims who suffered under Healy, as well as the brutal regimes in Iraq and Libya. This is just one example of the gutter politics that Ken Livingstone has engaged in over the course of five decades.

Given this history and his apparent lack of remorse or apology for his recent statements, Ken Livingstone should be granted no place or respect on the British left. He has no place in Labour and is a stain on the ideology of Socialism; he must be expelled.