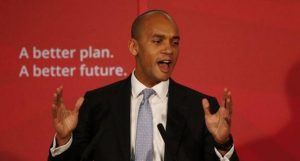 “Everyone wants to be radical”, wrote Blairish Streatham MP Chuka Umunna in the Independent on 29 January – “but the truth is a bit different”. Umunna reports a discussion with writer and journalist Paul Mason, which he says “got me thinking about the labels we attach to people”.

The article is interesting because it is actually pretty sharp-eyed about the mainstream Labour left of which Mason is a representative, but vague and evasive about Blairism’s record in office and political project.

As an aside, but an important one, Umunna says that “all of the shades of left – from your Marxists to your centre-left social democrats – should have a place in the Labour family”. Comrades in Streatham expelled or persecuted for being revolutionary socialists should demand Umunna’s support against the witch-hunters.

Umunna also argues that “any abuse through labelling – wherever it comes from – should be consigned to the democratic dustbin”. Both these statements, if meant seriously, would put him in this respect well to the left of some influential people in Momentum!

But back to the core arguments. “Many who for years described themselves as Marxists”, Umunna notes, “have now become ‘radical social democrats’, a precursor – once they have secured power – to perhaps heading in a more socialist direction.” This is no doubt how some leading Labour figures conceive of things. In fact, if your conception of socialism is radical, class-based and democratic, it will hardly be possible to head in its direction without stating, arguing and fighting for the goal in advance. That is precisely why it is such an issue that there now so many socialists around, but so little discussion about socialism.

Umunna’s definition of “Marxist” is shoddy – essentially a lot more state control. Nonetheless he has the advantage over much of the Labour left here that the rest of his article does nonetheless imply a definition of socialism as something different from social democratic reforms.

He is surely right that Mason and other leading comrades are now “radical social democrats” and to ask “Just how radical are the former Marxists?” As he says, limited nationalisations, somewhat higher taxes on the rich, free education and so on are not particularly radical. (However, he fails to acknowledge what a shift they represent – for reasons that will become obvious below.) And Umunna is “bemused” to hear a national investment bank, also advocated by Ed Balls, described as radical. Me too!

So far, so clear. But Umunna goes all blurry when it comes to his own political tradition. As against a clear definition he quotes from Paul Mason himself of in what sense the latter is a (radical) social democrat, he defines his own “social democracy” in such a way as would cover an enormous range of leftish, centrist and perhaps even right-wing politicians – “a ‘social market’ model – where the private and public sectors work in partnership together”, with “the right balance between the interests of capital and labour”, so “we can build a more equal, fair, democratic, sustainable and prosperous society”.

However, it gets worse. Umunna indignantly rejects, as an example of abuse through labelling, the idea that Tony Blair and Gordon Brown’s governments were neo-liberal.

In fact Blair and Brown were thoroughly neo-liberal, often failing to live up to even Umunna’s stretched-to-tearing definition of social democracy.

Neo-liberalism involves “favouring free trade, privatisation, minimal government intervention in business and reduced public expenditure on things like social services”. Then Umunna paints a fantasy picture of the New Labour governments in order to deny they met these criteria:

• He says that New Labour didn’t reverse “many of the Tory privatisations”, when in fact it pushed the privatisation agenda much further and in some cases faster than the Tories had, including in the NHS.
• He cites “investment in schools and hospitals”, but neglects to even address the point that this investment was on the basis of privatisations, marketising reforms and in many cases simply pouring money into the pockets of private companies. He says nothing about the fact that as soon as the economic crisis hit New Labour politicians began advocating cuts to public spending.
• He cites the minimum wage, which in fact was set at the lowest level Blair could get away and with numerous exemptions, and tax credits which subsidised low pay.
• He cites minimal improvements to workers’ rights but says nothing about the maintenance of all the Tories’ anti-trade union laws and the proliferation of casual work.
• He cites “lifting millions out of poverty” but says nothing about the fact this was done alongside enormously increasing the wealth of the rich and inequality between workers and bosses.
• He cites the fact that the overall social security bill did not fall in the pre-crisis years, but says nothing about the completely “unprovoked” cuts to various benefits the Blairites made in order to make the system more punitive.
• Bizarrely he cites the “nationalisation” of part of the banking system, similar to the measures carried out by George W Bush in the US, ie completely in the interests of the bankers themselves and of the rich.

To say nothing of the persecution of refugees, the Iraq war, and so on.

It is nonsense to say that “by any stretch of the imagination… the last Labour government was not a neoliberal one.” And nonsense to say that, while “Labour in office [should] have done more to challenge neoliberal thinking”, “you can’t jump straight from one economic model, Thatcherism – which dominated economic thinking for two decades – to a model which sits right at the other end of the spectrum immediately”.

New Labour did not begin to move away from Thatcherism, however tentatively. Using different language in order to theorise and justify itself, and spending more money in order to oil the gears, it modernised the Thatcherite project in order to carry it forward energetically and enthusiastically. It was not social democratic at all except in the sense that it represented the British version of the more widespread phenomenon of social democracy’s self-disappearance through neo-liberalisation.

If Paul Mason and Jeremy Corbyn are left-wing social democrats who probably still on some level conceive of going beyond social democracy, Tony Blair is far beyond the right-wing boundary of anything that can meaningfully be called social democratic. That defence of his utterly neo-liberal record remains so central to the project of Chuka Umunna et al must surely say a lot.