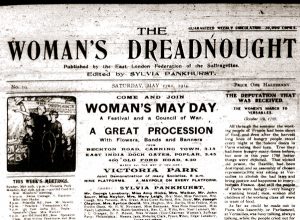 When Parliament voted for women (over thirty, with a property qualification) and men (without restriction), Britain was still at war – and more than that, the war was going quite badly.

Initial enthusiasm had been undermined as conscription was brought in, and industrial conscription under the munitions act, living standards were cut with rationing, and dissent repressed under the Defence of the Realm Act.

At the time that Commons speaker James Lowther organised his conference to look at the franchise (out of which the proposals to extend it were made) much of the United Kingdom was seriously hostile to aspects of the war drive.

Open rebellion against the war broke out in Ireland in Easter of 1916, and by 1918 attempts to put that down were stymied by mass opposition to conscription (which they never dared introduce in Ireland).

In Glasgow and Barrow, workers were in open revolt against the Munitions of War Act, and against austerity.

When the measure was introduced, the new Soviet government in Russia had just taken Britain’s second-most important ally out of the war, leaving German troops on the Eastern Front free to move to the Western front in preparation for the last big offensive, the ‘Kaiserschlacht’.

Just weeks before the vote, John Maclean, the popular Scottish labour leader, had just been named representative of the Soviet Government in Britain.

The decision to extend the franchise was one that was meant to shore up the democratic claims of a government that was seriously in trouble with its own people.