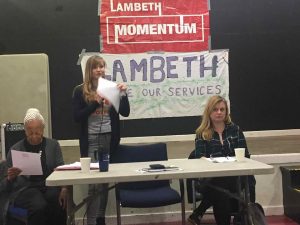 On Saturday 20 January, eighty Labour Party members, community activists and Lambeth residents came together for an open conference, “Lambeth: For The Many Not The Few”, to input into the development of Lambeth Labour’s May 2018 election manifesto.

The purpose was to discuss draft policy proposals across six areas (Education; The Environment; Finance and Local Democracy; Housing; Libraries; and Social Care). After introductory speeches from Ruth Cashman (Secretary, Lambeth Unison) and Ellen Lebethe (Vice President National Pensioners Convention), most of the day was taken up with a series of workshops. Based on the drafts presented, new ideas and policies were discussed, noted, agreed or disagreed.

There was general agreement that is was not good enough for Labour councils just to work out ways of implementing Tory cuts in the “least nasty way”. Local government desperately needs more money and an end to austerity. That means councillors mobilising the community and trade unions to fight a weak Tory government across the country, demanding adequate resources.

Final policy proposals will be worked up and sent to the Lambeth Campaigns Forum and Labour Group. They will be the policies Jeremy Corbyn supporters locally fight for, up to and beyond the May elections.

The day closed with a speech by Ted Knight, chair of Gipsy Hill Labour Party and former Leader of Lambeth Council, celebrating the event as an important step forwards in the attempt to reshape the Labour Party as a democratic and outward looking representative of local working-class communities.

A speaker for the Picture House community boycott campaign explained the latest attempt by Cineworld to lock-outworkers on strike. £100 was raised for the strike fund, and, later on, many from the conference marched down with placards to join the Ritzy picket line.