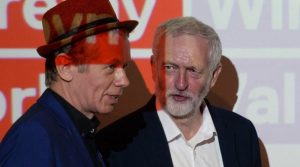 Richard Barbrook, Senior Lecturer in Politics at the University of Westminster, a member of Games for the Many and Digital Democracy & Games Strategist for John McDonnell, spoke to The Clarion.

What generated all the publicity last September was John McDonnell telling The World Transformed festival at party conference that I was running the Treasury team’s wargames. What he meant was Labour was conducting role playing exercises like those used by the military, the NHS, businesses and the civil service for future planning.

Before the 2010 general election, the civil service gamed what would happen if there was a hung Parliament. Unfortunately for them, the Lib Dems didn’t game this scenario which meant that they were shafted in the coalition negotiations that were organised by the civil service. Learning from this mistake, John McDonnell asked me to organise role playing exercises which simulated the Corbyn government’s first hundred days in office.

As John said in his speech, we need to think about the obvious problems which might face a radical Labour government, such as capital flight or a run on the pound.  Although, given the way that the Tories are wrecking the economy, the currency might well rise in value when responsible grown-ups take over running the country! Because of Tory splits over Brexit, Labour is now getting a good response from business, a much more positive reception than you’d expect. However, this friendly attitude is not going to last forever. Labour needs to plan for potential crises precisely because we know there are lots of risks ahead. The electorate are trusting that a Labour government will improve their lives and they mustn’t be disappointed.

It would also be interesting to test scenarios which examined under what circumstances would a Labour government intervene in a foreign country. After the Iraq debacle, party members are rightly very averse to sending British troops into action. However, you could test this resolve by simulating crises in places where there are either large numbers of British people living – such as an armed conflict in Spain over Catalonian independence – or where an important ethnic minority originated from – such as civil unrest in the Caribbean after a natural disaster. Thinking about these potential problems in advance would help the next Labour government to avoid making the same mistakes as its predecessors.

I’m a founder member of Games for the Many. We created CorbynRun for the 2017 election campaign which is an app game that you can download for free from gamesforthemany.org. In this game, you play Jeremy, who chases Tories and bankers and then shakes them down for their money which enables Labour to pay for its manifesto pledges. We got the initial idea from FiscalKombat which was a laptop game made for Jean-Luc Mélenchon’s 2017 French presidential campaign. However, we removed the violence from our version and didn’t focus simply on the heroic leader figure.

In our game, each time that you secured enough money to implement a manifesto pledge, more and more people joined Jeremy in his pursuit of the Tory tax dodgers. We had almost 2 million impressions for CorbynRun in the run-up to the election. It’s definitely the most successful project that I’ve ever been involved with!

Since last summer, Games for the Many has organised a Game Jam in London in December when people spent the weekend making prototypes of app games for Labour’s local election campaign. We’ll be holding more Game Jams in Manchester in February and in Bristol in April. Labour already has lots of support within the industry which is not surprising given that the Tories’ hard Brexit threatens games companies whose success depends upon being able to recruit talent from across the European Union. Games for the Many is now setting up a platform cooperative which will help indie developers to make games for trade unions, NGOs, charities and community organisations.

I’m also involved in developing a game for local CLP members which teaches the different factions of the party that they’ll have work together when Labour forms the next government. After the Mitterrand government was elected in France in 1981, so many people got official roles that the activist base of the Socialist Party was seriously weakened. With our bigger membership, Labour won’t be faced with the same problem. Instead our game will prepare CLP members for their crucial role driving forward the agenda of a radical government.

This project was inspired by the megagames where 40 to 50 people role play famous historical events such as the 1917 Russian revolution or the Roman invasion of Britain. Since it would be imprudent to model a 2019 Corbyn government, we thought that A Very British Coup would make a very good theme for this training game. It’s interesting to read Chris Mullins’ 1982 novel today, especially as the major threat from abroad to the radical Labour government in the book comes from the Americans while there’s almost nothing about any problems with our European neighbours.

With this A Very British Coup theme, we can also use this game to educate people about Labour’s recent history as they will be playing the rival factions of the right, soft left and hard left within the 1980s party. Not surprisingly, unlike what happened during this decade, we’ll be hoping that the hard left will be able to unite the party under its leadership in our game. One of the interesting things about role playing exercises like A Very British Coup is that their participants get the most benefit when they are playing against their own ideological inclinations. We’d like AWL members to play the Fabians while Progress supporters should take on the role of Socialist Organiser! We’re conducting our first tests in Folkestone in early February and then there’ll be a public launch in London in March or April before offering the game to CLPs across the country.

Obviously I am bigger fan of digital democracy than you are, but I agree that you have to have actual, real world structures of accountability. Labour doesn’t want to become like Podemos with participatory democracy locally but with a plebiscitary dictatorship at the top. The Labour Party, for all its faults, has developed its own structures of accountability during its long history, as some dodgy Haringey councillors have recently been finding out! Our task now is to use digital democracy software to widen and deepen the participation of the membership in the party’s policy making processes, such as introducing participatory budgeting at local and, eventually, national levels.