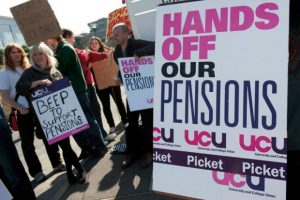 Notes
1. That following an 88pc yes vote on a 58pc turnout, the University and Colleges Union has announced 14 days of strike action at 61 universities in defence of their Universities Superannuation Scheme pensions.
2. That under the changes proposed by Universities UK a typical lecturer will lose about 30-50pc of their pension income, which could amount to about £150,000.

Believes
1. That education should be a public good: we must defend it against cuts and austerity as part of fighting for a fully public, democratic, free education system.
2. That all workers should be entitled to a decent pension. We need levelling up, not levelling down: we must defend all existing pensions against cuts.
3. That the UCU’s fight is a crucial one that the whole labour movement, Labour Party and student movement must rally round.

Resolves
1. To support and publicise UCU’s struggle, including by
– Strengthening our links with local UCU and student activists.
– Encouraging and organising our members to attend picket lines and protests.
– Calling on our MP and councillors to use their platform to support the strike, as well attending picket lines and protests.
– Writing to the local press.
– Sending protests to Universities UK and [local university management/s]
2. To call for a clear public commitment from the leadership that if this attack goes through the next Labour government will bring every means to bear to force Universities UK and USS to reverse it.

For more information on the strike including university by university ballot results, see
https://www.ucu.org.uk/article/9242/UCU-announces-14-strike-dates-at-61-universities-in-pensions-row