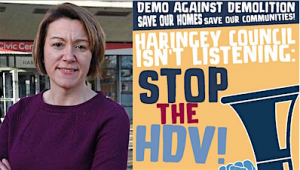 Claire Kober, the Blairite leader of Haringey Council, dramatically quit on 30 January, announcing that she will no longer contest her council seat in this May’s local government elections.

Kober’s resignation is a huge victory for the campaign to stop her flagship, and highly controversial, Haringey Development Vehicle.

The HDV, a proposed partnership with anti-union construction giant Lendlease, which would have seen the bulldozing of social housing in Haringey, was opposed by a wide array of forces, both local and national

A vibrant community-led StopHDV campaign, local trades unions, the local Labour Party, both Haringey MPs and a significant minority of current Haringey Labour councillors all opposed the scheme. In recent months, Labour Party selections for the local elections returned an overwhelming majority of candidates pledging their opposition to the scheme.

Last month, 22 sitting councillors piled on the pressure by appealing to Labour’s National Executive Committee (NEC) to offer assurances that they would not be disciplined by Kober for voting down the HDV at a full council meeting in February – in other words, that they would be supported in upholding local and national Labour Party policy.

Kober, much fond of branding the opposition to her leadership as “ideological”, must go down as one of the most hubristic and blinkered local government leaders of recent times, willing to push the struggle over the HDV right up to the bitter end, alienating former supporters, ruining the careers of her acolytes, and almost tearing the local party apart in pursuit of her aims

In her resignation statement, Kober accused the campaign against her of “sexism and bullying.” Of course, it is possible that from individuals Kober faced sexism, which is endemic in society and, sadly, also present on the left. Criticism of Kober should be squarely political, and sexism of any sort must be condemned, with any specific complaints investigated. To put Kober’s resignation down to sexism, however, or to characterise the campaign against the HDV predominately in those terms, is a travesty of what has happened in Haringey.

On 4 February, Haringey Labour Party meets for a local government conference to decide on the policies it wishes to see in the party’s manifesto for the May elections. A demonstration will still take place at the Civic Centre on 7 February organised by opponents of the HDV, and it is important that movement continues to ensure that the incoming council administration is responsive to popular pressure.

The campaign against the HDV has had resonance beyond our borough. With the mounting housing crisis, and the widespread discrediting of outsourcing and privatisation after Carillion, let this victory inspire all working-class campaigns for decent homes, jobs and services across the country.