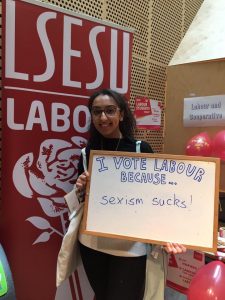 Rania Ramli and Artin Giles are the two main candidates standing to be chair of London Young Labour at its AGM on 3 February. We asked them both for interviews. Artin didn’t get back to us until a recent message saying he’s too busy, but we spoke to Rania. Publication of the interview does not imply that The Clarion endorses her candidacy.

Where do you stand politically? What kind of society would you like to see?

I’m a student, I just started at university. I joined the Labour Party in 2013, not because I liked its structures or wanted to get involved in “politics” as such, but because of issues I cared about. Gender equality, migrants’ rights, workers’ rights. Political involvement was not a thing in my family, so it was great to have a vehicle to change those things and have an impact. Now, with London Young Labour, with so many members, we have a potentially massive platform to impact those things, to support workers on picket lines, to support migrants, to fight climate change… All those things are possible but it feels like we’re not having that impact at the moment.

Fundamental to socialism for me is tackling inequality – the fact we have such vast inequality in one of the richest countries in the world, but also inequality internationally. Internationalism is central to it. I see the world as one community and believe workers in all countries have a lot in common with each other and can share the same values. That collectivity and sense of international solidarity is really important.

So why should members at LYL conference support you?

There are three main focuses I’ll have. The first is a strong commitment to standing with workers. That’s a two-pronged strategy, working with the official structures of unions but also standing with people at a more grassroots level, in workplaces and on picket lines, and reaching out to ununionised workers to draw them in. I’ve spent a lot of time recently visiting picket lines, for instance for the Picturehouse strike and that should be a priority for the whole organisation.

When I first joined the Labour Party, I didn’t know about trade union history, about this precious and important thing we began in the UK. Now we’re seeing things like Picturehouse and McDonald’s because of course young workers are most vulnerable to exploitation. When you’re talking about precarious workers or any workers going up against these massive firms, these massive concentrations of power – we’re only able to counter that with people power. We need to put that back at the foundations of the Labour Party and its youth structures.

Secondly I’m standing to make liberation central, for a London Young Labour that’s inclusive and responsive to LGBT members, women members, BAME members, and reflects that in all our work. I’m an intersectional feminist.

Last but not least I’ll have an emphasis on political education. We don’t do much to teach people about being troublemakers at work, or about our movement’s history, or about what socialism means. We want our members to go out and canvass and give out leaflets, but we’re not giving back what we should. I want to change that, including with a political summerschool every year but also events throughout the year.

Those are my priorities. I’ve been organising around them already and was committed to them before I even thought about running for LYL chair. I also think they relate to my personal experience – coming from a working-class background, being a BAME woman, a Muslim woman, that’s helped form my worldview and taught me how to relate to people and also the importance of political education, coming from a family that wasn’t political.

Some have described you as the right-wing candidate, what would you say?

That’s wrong. I see myself as being on the left of the party. I don’t think the division in this election is between left and right. I’m standing to empower grassroots members, not contribute to a factional struggle.

Who did you support in the leadership elections?

The first time I voted for Liz Kendall and the second Jeremy Corbyn. Let me explain. In 2015 I was 16 and I’d just finished my GCSEs, I was very raw to it all and I thought the Labour Party need a shake up. I also desperately wanted a woman leader, which of course we’ve never had.

At the start of the second election I leaned towards Owen Smith and was going that way, but in the course of it I changed my mind. The background was that having a Labour government in power when I was young changed my life – those governments did loads wrong but a lot of good things for people too. I was still very young, in the first year of my A Levels, and pretty much everyone around me was saying Corbyn can’t win a general election. I bought it. I felt like it was a sacrifice that had to be made. Of course the media played a big role too. It shows the importance of having political people around you to discuss with, of being part of an organised collective.

As the campaign went on, as the momentum grew, as I met new people and discussed, my view changed and I realised the electability argument was false and so I changed my position.

What structural changes would you like to see in Young Labour?

We definitely need more autonomy – it’s ridiculous we don’t have access to our own data, that we have to rely on the region to such a massive extent. We also need more resources. Our membership has grown massively and we contribute so much to the party on various levels but we don’t get much back. We need more resources and more staff support so we can run more events and do more campaigning.

At the moment we’re very central London-based and university-dominated. We need to work much more closely with CLPs and youth officers and local groups in the boroughs.

There isn’t a push for local groups because the party structures don’t see the need – often they see young people as people to canvass and give out leaflets. LYL can be a bridge between those structures and actual grassroots activists. We can help young members set up local groups and push the party to champion that. We can also help people set up their own events and so on.

Obviously Brexit is a big debate. What’s your position?

I don’t want Brexit to happen – it will be catastrophic for so many people and so many communities. If it does happen I think protecting freedom of movement is the most important thing we can do. It makes economic sense but also social and moral sense. Migrants contribute so much to our economy, but we have to go beyond that to the political and moral case. We’re all human beings: having free movement benefits individuals but also in terms of cultural exchange and our ability to relate to people from different backgrounds. That’s one good thing about the EU. Yet that international outlook is on the defensive, with Brexit and Trump and the far right in Europe. We need to push the party to be much stronger on fighting back, it’s a serious problem.

I don’t see the distinction between British and non-British working-class people. I don’t accept that separation. In any case it’s not true that migration is pushing down wages and conditions. Jobs are not a finite thing. Migrants are contributing to the economy and also to struggles to organise workers and drive up conditions.

Of course the EU is capitalist and neoliberal, but you can’t fight that from outside. That’s the coward’s way out. The answer is to be inside Europe and have a socialist government which will lead the challenge against that.

There’s a motion to the conference about Trident. What’s your position?

I haven’t engaged with the issue much, so I’m not sure, but my first instinct is to say that spending billions on a weapon that we should never use is not a good idea.

What’s your position on the recent expulsion of socialist activists from the party?

It’s really important that Labour is a broad church. That what makes us unique and strong. I don’t see people leaving other parties to join as a problem – people change their minds, they change and develop. We should be welcoming people coming over to the party. In terms of socialist groups within the party again it’s about the broad church. People will organise around different opinions and allegiances and that’s fine, at the end of the day we all want a Labour government. If people are expelled for racism or sexism that’s a different matter, but if elected I’ll certainly support comrades fighting to get readmitted.