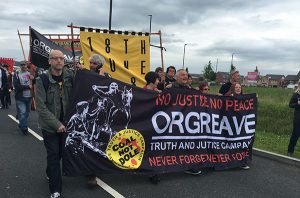 In October 2016, Home Secretary Amber Rudd rose in the chamber of the House of Commons to announce that she sees “no need for an enquiry into the events at Orgreave on June 18th 1984”.

Having led the campaign up a series of country lanes, let alone garden paths, via the IPCC and two home secretaries, the Tories were ecstatic in refusing an enquiry. Rudd went on to explain her reasoning: “It was a long time ago…. No one died…there was no miscarriage of justice… the police have learned lessons…”

The fact that 95 miners, dressed in t-shirts, shorts and trainers, were arrested, beaten to the edge of death, framed, many imprisoned in Armley jail, only to walk free after 15 months of hellish limbo, fearing life imprisonment, when their trial collapsed after police collusion and perjury was proven – all this meant nothing to Rudd.

Sat with comrades in the public gallery I realised why bullet proof glass had been installed.

I spent the journey back with a comrade arrested that fateful day. Thrown into a pound with injured fellow pickets, like others he used his t-shirt to bandage the wounds and broken limbs of his comrades denied medical aid. His silence and the look of outright dejection said it all.

For over a year he had waited to see his fate. Labelled a violent thug, he faced the might of British ‘justice’, knowing full well what that meant where striking miners were concerned.

Just imagine that: living with the knowledge that the powers that be could deny him his liberty, punish his family, destroying their lives into the bargain, all for simply wanting the right to work.

I do not name him, his privacy is important, but to this day he is plagued with the horror of those memories. Frequent bouts of dark depression blight his life, but despite that he fights on. Knowing him and fighting alongside him is an honour.

He epitomises the fighting spirit of we ex-miners. Violence by rampaging mounted police, being framed by the state, imprisonment could never shatter our determination. Even the destruction of our industry and the devastation in our communities has been unable to do that. If Amber Rudd thinks that a statement in Parliament will stop us then she is even more deluded than we imagined.

Since then our campaign has gone from strength to strength. Floods of messages of support and speaking invitations has been the result.

We marked the anniversary of her statement with a Halloween ‘Death of Justice’ rally in Sheffield. The hundreds present made it a joyous, upbeat event. The message sent to the Tories was – “We ain’t going anywhere!”

Our crowning achievement since then has been a commitment in the Labour Party manifesto guaranteeing us, like all our fellow justice campaigners, a full public enquiry. The election of Jeremy Corbyn as Labour leader has both ensured that and given a fillip to our struggle.

The lesson is simple – they only win if we give up!

Whilst we live we fight on. Thanks everyone for your ongoing support. Solidarity!

• John Dunn is a former miner. He was also one of the surcharged councillors who led the Clay Cross struggle: see his article here.