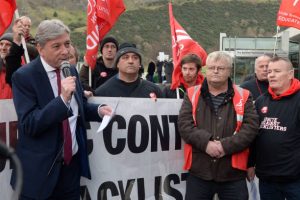 Confronted by a Labour Party led by Jeremy Corbyn at national level and by Richard Leonard at Scottish level, the Scottish National Party is continuing with its increasingly desperate campaign to portray Labour as Red Tories.

According to a recent tweet from SNP MP Angus McNeill, for example: “Labour still acting as human shields for Tories”, while SNP MSP Humza Yousaf has tweeted: “Scottish Labour don’t even hide it any more. They openly want to hand power from Holyrood to the Tory Westminster government.”

But this week, in a press release relayed through the Glasgow Herald, the SNP hit a new low with its accusation that Campaign for Socialism and Scottish Labour Party Executive Committee member Cara Hilton had been “working as a lobbyist on behalf of Carillion.”

This, claimed the SNP, was (further) proof that “they (the Labour Party) are not the party of ordinary workers – they’re hand in glove with big business. … One of Richard Leonard’s biggest cheerleaders (Cara Hilton) was lobbying on Carillion’s behalf.”

In fact, as the SNP knows full well, Cara Hilton is an employee of the Civil Engineering Contractors Association (CECA), a federation-cum-trade-association of some 300 civil engineering employers, most of them being pretty small (and very small when compared with the likes of Carillion).

The pro-independence Commonspace website ran an article which was little more than a cut-and-paste job of the Glasgow Herald article – hardly the highest form of investigative journalism. But Commonspace thinks that Robin McAlpine is a serious thinker. So, no surprise there.

Only 24 hours after the SNP/Herald article SNP leader Nicola Sturgeon herself punted the ‘Labour are Red Tories’ line. She tweeted:

“At the end of a Labour debate in Scottish Parliament on the budget, during which they rail against Tory austerity, Labour ends up voting with the Tories. Go figure …”

Anyone who did “go figure” would have found out that what Labour MSPs voted for was their own motion – calling for defence of public services, a decent pay rise for public-sector workers and investment in a low-carbon infrastructure.

Did Sturgeon seriously think that Labour MSPs should not vote for their own motion because Tory MSPs, on the basis of their own opportunist calculations, voted for it as well? And given that the Green MSPs also voted for the Labour motion, where was Sturgeon’s condemnation of ‘Green Tories’?

The SNP was wallowing in hypocrisy when it first wheeled out the expression ‘Red Tories’. Between 2007 and 2011 the SNP minority government in Holyrood had repeatedly done deals with the Tories in order to get their budgets through Holyrood.

But, after the Blair years and the disastrous decision by the Scottish Labour Party leadership to work with the Tories in the ‘Better Together’ campaign, the ‘Red Tories’ label struck a chord. Now, however, it is nothing more the slanderous catchcry of lowlife nationalism.