Janine Booth, London Underground worker, RMT union activist, poet and author, is now an active member of the Labour Party in Hackney South and Shoreditch. But after she applied to rejoin the party in 2015 after a long absence, she was turned down and it took her two years to finally be admitted. Janine urges other excluded comrades to keep fighting.

I joined the Labour Party as a teenager in the 1980s. But when Blair became leader and the New Labour government privatised the place I worked and the Labour Council closed my son’s nursery and tried to privatise the estate where I live, I stood against Labour and was expelled in 2003.

I applied to become a Labour member again in 2015, and the National Executive Committee decided that I could rejoin if my CLP did not object. My CLP did object, and I was not readmitted.

Two years later, I tried again, and the NEC’s decision was the same. By now, the CLP had elected a new set of (more left-wing and tolerant) officers. I had worked with the CLP closely, canvassing in elections, performing at social events, and building solidarity with the strikers at the local Picturehouse cinema. CLP officers interviewed me about my politics, my record and my reasons for wanting to rejoin. 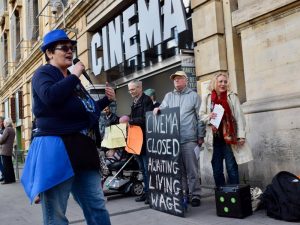 Janine performing “Poetry on the picket line” outside Hackney Picturehouse

I told them about my years of trade union activism, that I am firmly on the left of the labour movement’s political spectrum, and that I am a member of Workers’ Liberty. They agreed that Labour is a ‘broad church’ and that if it is OK for members of Progress, Labour First, the LRC or any other group to be in the Labour Party, then it is also OK for Workers’ Liberty members.

The CLP told the NEC that it had no objection to me rejoining, and I am now a Labour Party member again.

On 2 January, I joined other CLP activists leafleting passengers at my local station pledging to renationalise the railways. Later that week, I went to my ward meeting, where we discussed – among other things – the democracy review, cuts to Special Educational Needs and Disabilities (SEND) funding, and the killing of Rashan Charles. Last week, I helped to organise and performed at a CLP gig that raised over £600 for the Picturehouse strike fund.

There are plenty of issues for Labour to unite and campaign around. Readmitting excluded socialists can only make us stronger. So if you have been unjustly excluded from the Labour Party, and if you don’t at first succeed in overturning this, then try, try again.