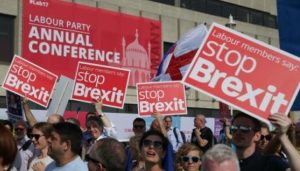 EU migrants were not responsible for years of stagnant wages and poor conditions, it was austerity politics and official tolerance of rogue employers racing to the bottom.

All governments have been responsible for not building council housing and leaving it to the free market. As a result, local families find that they are forced to rent from private landlords rather than receive a council home or buy their own. If someone from the EU has lived and worked in an area for a long time they are a resident and are as entitled to be on the waiting list as someone who has come from another area of the UK.

How did we get to this point of vilifying EU migrants who keep our NHS and public services alive? The coalition government cut spending on public services way beyond the level that they could remain functional, long waiting lists and large class sizes arose from this shortage. They also stalled the economy with their austerity mantra; meaning wages fell behind inflation.

In this dire situation, the Tories and their press allies fell back on finding scapegoats to blame. But, there were two scapegoats that trumped all others: foreign aid and EU migrants. To win the hearts and minds of voters who were suffering by the hand of these cuts the Tories and press would turn neighbour on neighbour.

With the blame placed on your neighbours, the Tories could get on with their objective of cutting public services to the bone. For the Tories it worked and they were returned after the 2015 General Election with a small majority.

Come the referendum, Cameron & Osbourne had spent six years blaming the oppressed and EU migration for the pain of their spending cuts.

The fault for the Brexit vote lays firmly with Cameron and the Tories but Labour needs to learn from what it has done wrong in opposition over the last eight years. We dithered and accepted the concept of the undeserving poor. Labour was worried that arguing for groups who were being vilified would lose us swing voters.

The lessons for Labour of pre-2015 should be obvious. Labour should not pander to the anti-migration agenda. We will never outbid the Tories on xenophobia and nor should we try to.

So, with the prospect of an election, a spending boost to Labour’s manifesto, and the prospect of Corbyn as prime minister, you would think the front bench, and everyone in Momentum, would support a change in Brexit policy. Sadly not.

Unfortunately, Labour’s front bench seems to have bought into the idea that the referendum vote was a vote against immigration, and Labour should accept curbs in free movement or face electoral annihilation.

At last year’s Conference there was a chance to challenge Labour’s policy on Brexit and free movement. Surprisingly, on the eve of conference the Campaign for Labour Party Democracy (CLPD) decided to whip Momentum’s vote against prioritising Brexit in the debated motions. When a member objected, they were told there was no time to question it. A Few had vetoed the will of the Many.

I felt CLPD was being undemocratic by preventing a vote by members on Brexit at conference. I moved a reference back to the National Policy Forum to think again about Brexit. This new mechanism had never been used before and is far from perfect. It does not allow conference to tell the NPF what its policy should be, only to say that we don’t accept the current policy and suggest a new policy from the debate.

I moved the reference-back motion to stop Brexit. I suggested stopping Brexit could come with joining the European Economic Area during a pause in full EU membership while we invested in underfunding of public services.

I thought CLPD could get behind this compromise but I was wrong. Without consulting Momentum members, their leadership claimed Momentum wanted my motion defeated and so it was.

Attempts to get pro-Remain candidates such as myself selected are again vetoed by a few in Momentum who do not hold hustings, interviews, or a member’s vote on who they want. Instead they recommend a vote for candidates who will support the leadership on Brexit.

We, the “Many”, should decide Labour’s Brexit policy and not the “Few.” In the meantime, members should use parliamentary selections to select candidates who they feel represent them on Remaining.

Failing a universal vote of Labour members on Remaining, we should all unite in bringing a motion to this year’s conference to direct the Party policy to be Remain.

A Labour Government should write a letter to the EU Council President withdrawing Article 50. Within three months the Government shall identify the structural investment problems that led to the original Leave vote, and write to the EU President with our proposals for tackling it. If there are any EU rules that may hinder this plan we will negotiate for temporary relief from those rules.

This proposal should include transforming more businesses into workers’ co-operatives, and nationalising or re-nationalising public services.