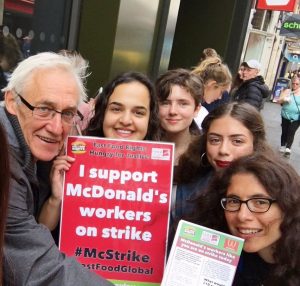 Nadia Whittome (pictured, with the sign) is a 21 year old care worker and law student living in Rushcliffe, Nottinghamshire. She is standing to be Rushcliffe CLP’s parliamentary candidate. For more on her campaign, see here or get in touch at nadiawhittome@me.com

I first became active in 2013, when I was 16 and lived across the river from Rushcliffe in Nottingham city. Austerity was devastating my community and I was determined to do something about it. I started organising against the bedroom tax with Nottingham People’s Assembly and came to work with lots of different left-wing groups. I chose to join the Labour Party because it’s through the labour movement we can effect social change. In 2015, as soon as I got a notification on my phone that Jeremy was standing – I threw myself into his leadership campaign; organising big street stalls with my friends, with dozens of young people, it was exciting. By the time of the second leadership election there was an established machine behind Jeremy, so I spent a lot of time canvassing members and made up Momentum’s top 100 callers. In the time I’ve been involved anti-austerity politics has moved from the fringe to the mainstream and I’m enthused by the prospect of transforming the country in a socialist direction.

How did you decide to stand to be the Rushcliffe PPC?

We have a once in a generation opportunity, to shift the political terrain in Britain. This is most striking in Rushcliffe – Ken Clarke is the father of the house, he’s been our MP for nearly fifty years, in an unwaveringly safe Tory seat. But things are shifting, last year we got a higher vote than in 1997 – and members are very excited about the prospect that we could win.

Last year I stood for the county council, it was an energising campaign, lead by often forgotten groups (young people, older people, BME people), and we achieved an 8% increase in the Labour vote. There’s a real thirst for something new here.

Since I put my name forward I’ve had a very positive response. I’m honoured to be backed by unions including the GMB, the Bakers’ Union, the RMT and sections of Unite, as well as the Co-operative Party. John McDonnell has given his personal endorsement, as well as [former Nottingham MP] Alan Simpson. I’m also backed by the Swing the Youth Vote campaign, a grassroots political youth movement. We’ve received lots of media interest, which is planting Rushcliffe on the map.

How would you describe your political views/worldview?

I’m an internationalist socialist. I believe in international working-class solidarity. That’s particularly important now, in the wake of the Brexit vote and how we tackle that as a labour movement. I want a sociailst society, one in which the majority has a meaningful voice, based on the power of workers, with good working conditions and living standards for all, so that we can all live comfortably and everyone has equal chances in life.

Some comrades might be surprised to hear talk about Labour winning somewhere like Rushcliffe. Why is Labour support growing?

Labour made historic increases all over the place – including the first ever Labour MP in Canterbury! People are really starting to feel the bite of austerity, and even in relatively affluent seats such as Rushcliffe, there are significant pockets of hidden deprivation. Home ownership in Rushcliffe is high, but young people, not just people my age but a decade older, are priced out of the housing market and can’t afford a tenancy so are living with their parents. Every local school has been impacted by the Tories’ cuts, and people are suffering at the hands of health cuts, especially in mental health services and social care. There is a realisation that the status quo which Rushcliffe traditionally voted for is failing, and we need to replace it.

What are the most important policies you’re fighting for?

My focus is on how we run the economy differently. After the financial crash, Labour didn’t have a convincing narrative or argument, we accepted responsibility for a global capitalist crash. With John McDonnell’s policies we are beginning to regain support and trust. To win in Rushcliffe, we need to localise our economic plan, delivering an Economic Recovery Plan for Rushcliffe, that details how a Labour government will boost our local area from day one. This would include provision of sustainable council housing, dealing with air pollution, re-establishing public transport which is vital in a largely rural constituency. As a care worker I am determined that we fight for a National Care Service, that works like the NHS or education at their best, and is publicly owned, publicly provided, publicly accountable, and free at the point of use.

Brexit is extremely important in Rushcliffe. We’re the only borough in Nottinghamshire that voted remain. I support a minimum of remaining in the Single Market and Customs Union, defending existing rights like workers’ rights, environmental protections and freedom of movement, and a referendum on any deal.

What areas of Labour policy do you think need changing or strengthening?

A large proportion of Labour members and supporters want clarity on our Brexit stance – Labour’s ‘constructive ambiguity’ should end. The high vote for Brexit in some deprived working-class communities is a sign of demoralisation. We need to give hope to demoralised forces in the working class by offering bold policies to rebuild services, build council houses, massively increase public spending, drive up pay and repeal all anti-union laws.

The 2016 referendum was a democratically dubious authority. We can and must convince the electorate that remaining in the EU can benefit workers and show how we will fight to improve the EU. For example, cracking down on the Eurocrats creaming off the fat and demanding investment in areas that have suffered most from austerity. Crucially we need to say clearly, as Corbyn had earlier, that immigration is not the cause of workers’ problems. Migrant workers are not the enemy. Capitalist exploitation, not the EU, is the source of our social problems.

There is enormous youth support for Labour but it’s relatively unorganised in terms of people getting involved. What can we do to change it?

The majority of youth support is students, precarious workers, and young parents. We’re a hard group to organise. In Rushcliffe we set up a Young Labour group in 2015 and organised a cross constituency mental health campaign with Broxtowe Young Labour. More recently we’ve worked with them on Hungry for Justice. We’ve also lead student and HMO voter registration campaigns. It’s about creating structures and provisions where young people are able to come in and out of activity as their lives allow, and making Constituency Labour Parties accessible to young people too. Young Labour nationally should be democratised and properly funding.

Beyond that it’s about not just treating young members as fodder for elections but as people with valuable contributions to our movement, who can lead campaigns and hold leading positions.

There is a perception that MPs are a sort of social layer apart from Labour members, let alone the wider population. What do you think?

This is a big problem. I’ve tried to address it in my pledges to members. Being an MP should not be a job for life, it is be a privilege of serving the public and your party and wider Labour movement. I’m calling for Rushcliffe CLP’s right to reselect our candidate before each election; I’ve committed to donating 20pc of my salary to causes that advance our ideals, to make it clear that I will not be an MP who takes your vote and then lives the high life in Westminster. It’s important that MPs and candidates are accountable by simply regularly attend CLP and union meetings.