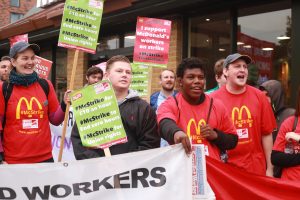 Shen Batmaz, a worker at McDonald’s in Crayford and Bakers’ Union activist, spoke to The Clarion.

You’ve just won a victory. What’s the significance of that and what next?

The significance is we’ve won concessions from a massive international company that has been steadfast in their hostility to unions, to negotiating anything with their workers. They didn’t negotiate, but we won a 6.7% rise on average. That’s clearly off the back of our strike: it’s the biggest raise in ten years, normally we get 1% or 2%, and this comes at a time when many workers are not even getting that.

Of course they’ve done it to shut us up, to demobilise the dispute. They’ve not done it because they care about their workers – it’s to stop people joining the union. Now, the problem for us but also for them is that 80% of McDonald’s workers who work at franchises won’t necessarily get it. It only applies to workers at directly operated company stores. A lot of workers who don’t get it are going to be extremely angry. We’ll respond – come in with us, join the union and then we can win this and more for every single McDonald’s worker.

So, our next steps are going to be to keep questioning McDonald’s on their health and safety record, on our conditions, on why young workers are getting less, often, than older workers they have to train. We’re going to keep building the union, bring in more stores and try to get into other fast food companies too.

We’re getting more and more members, we’ll keep building and you can be sure there will be more strikes soon.

How did you get started?

I started working at the McDonald’s in Crayford in July 2016. By October I was in the union [BFAWU] and had started to organise. Cambridge [the other site out in their first strike in September] had been going for a year and a half before that, but I didn’t know. I met them once I joined the union. I originally got started for a simple reason. I love the people I work with. For me to see people in the store being abused, to hear people really struggling, and hearing so many horrific stories from my store and others, I knew we had to try to do something.

Until January 2017, there were only a few of us. Most people had no idea what a union was. I think a lot of young workers don’t even know what their existing rights are, so we had to overcome that. There were conversations we had to have over and over. It had to sink in. We eventually got up to about ten members, but it wasn’t until the general election that we had a bigger breakthrough. When Jeremy Corbyn promised £10 an hour and said his government would stand up for workers, a lot of people woke up. To hear a mainstream politician saying that gave people a lot of strength. The union in our store saw a massive surge around the election.

Like most people my colleagues weren’t that engaged with politics, they were just trying to get by. But what the Corbyn phenomenon has done for us as for so many others is ignite a fire to make us start speaking up. So many young people are angry when we see what our parents had, what was fought for and won by workers and unions before, but is now being dismantled without much of a fight. It’s hard to know what to do about that, but once people are up and running and convinced it’s possible they want to fight.

How easy do you find it, as a socialist, to make more comprehensive sort of arguments about how society should be run differently?

I think that’s not the dominant discussion coming out of our organising, but it often begins to come up. If you start to ask questions about the unfairness in society, about how we can get so little when our CEO is on millions, obviously that poses bigger questions about how society is organised. People who’ve not previously thought much about politics can quickly get onto really big questions about the nature of society. Why is this the seventh richest country in the world and yet people are using foodbanks? That must say something much wider about our society.

Seeing how workers came together in Cambridge and Crayford has proved to me that people have a want to help each other. They want to fight for what’s right, that’s why they chose to stand side by side. Without discussing what’s socialist or what’s not, even the act of unionising against a massive corporation is a discussion on our society right now.

Have the anti-union laws come up in your dispute? How do we deal with them?

Yes, they have, because the balloting process is deliberately made long and difficult, to stop people from taking action. For people who’ve not been involved in organising before, that process can be scary. Just the fact that the employer has been given notice can make you nervous. What we’ve lost is the days when you were able to sit in a room with your friends from work and raise your hand and there was that moment of comradeship. Instead people are stuck at home with their ballot, on their own, and second guess and psych themselves out. The ban on flying pickets is important too – we would have liked to go to other stores, to show them what we were doing and give their confidence a boost, but of course we couldn’t. These laws were put there to stop workers demanding their rights, so we absolutely need to fight them! While these laws remain, workers’ rights will continually be taken away and people will remain scared of fighting for them. The whole labour movement should campaign for them to be repealed, including the Labour Party. If they’re repealed we’ll have a much better chance of protecting ourselves and fighting to win more.

As you’ve described, there’s very widespread support for Corbyn and Labour among young people, but it’s not necessarily reflected in mass involvement. Why do you think that is, how do we change it?

It’s that so many people just don’t know how to get involved. People have heard of Corbyn, they like him, but they have no idea how to get involved in Labour. It comes back to educating people about what’s possible, about their rights. We should be taught properly about politics at school, about how you vote, how you get involved in activism, and we should also be taught about employment law.

We need far more young people involved in labour movement politics – it’s the future of eighteen year olds and sixteen years olds that is at stake, and it’s young people hit hardest by the rights we’re losing. More Young Labour groups would help. Momentum has been very good at getting people involved, through social media especially. Social media is important but we also need more grassroots organisations with young people leading them. How do we bring those young people in? That’s a more difficult question.

Corbyn and McDonnell have been vocal about supporting you, what about the Labour Party more widely?

We’ve had great support from the leadership and the MPs – we had loads of MPs at our strike day rally in Parliament, though I feel I should single out Laura Pidcock for the consistent help she’s given us and John McDonnell for being with us every step of the way. From the conception of the fast food rights campaign, to our strike. John gave us courage and strength. We got great support from conference which we were invited to attend. Most of all we’ve had huge support from the many members and local Labour Parties who’ve got in touch to offer help and invite us to speak.

When you ask about the central party machine and whether they put stuff out: I don’t know, but it doesn’t matter to me. The real Labour party are the people who reached out from across the country, the members and those in the local communities. That’s what the Labour party has always been built on, and those are the people that came to our side in our struggle. I can’t comment on official publicity as I only know our experience, so it could be different for other disputes which are less high profile, and which fewer members have heard of. So I can’t answer for them, but it’s important that Labour support every workers’ struggle, whether it’s McDonald’s, Picturehouse, Fujitsu or BA Mixed Fleet. We should support every worker who fights for something more.

You’re training activists to go and help organise other McDonald’s stores, is that right?

We have had volunteers offer to donate time to be trained up. Their offer was to help us organise more stores and reach more workers. But it’s more than that: the Bakers’ Union is dedicated to this movement, and want people to gain skills which mean they can go back to their own workplaces and start to organise there. It’s not just about McDonald’s – if we win against McDonald’s, what about all the other workplaces where we’ve not even begun to make an impact? So yes, we want volunteers to help spread our strike but also people who gain real skills to build the labour movement more generally.