This statement went out to all Momentum supporters in Truro and Falmouth CLP on 17 January. I have sent it to The Clarion to publish both because it is important for comrades elsewhere to know what is happening here and because, as I explain below, what is happening has wider political significance for Momentum and Labour.

It’s important for people to understand that Truro and Falmouth and Camborne and Redruth saw two of the biggest constituency increases in the Labour vote – 172pc and 87pc, as against 37pc nationally. Camborne and Redruth is one of relatively few seats where a Momentum-backed candidate has been selected so far.

Please feel free to contact me with questions or comments: laurarogers53@gmail.com 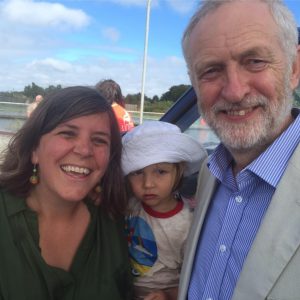 Following Friday’s meeting, I have decided to resign as Chair of Momentum Truro. I cannot preside over a group in which democratic processes have been so insidiously undermined.

In the autumn I became aware that Momentum Head Office had already decided that Anna Gilllet would be the Momentum-backed candidate in the forthcoming Truro and Falmouth CLP selection for its Prospective Parliamentary Candidate. This decision was made without any vote or discussion within the local Momentum group.

As chair, I was keen that local Momentum members had a say in who should be their candidate. We agreed as a group that we would wait to see who came forward once the selection process had begun. At that point Momentum could choose to endorse a candidate, making an informed decision about who was the best candidate available. If this led to a disagreement with head office then so be it. To be clear, there are other left-wing potential candidates.

I advertised Friday’s meeting and put a discussion of the selection process as one of several points on the agenda. I proposed that we organise and advertise a further meeting in which members could question potential candidates with a view to giving a local Momentum endorsement regardless of the decisions made behind closed doors at Momentum HQ.

Supporters of Anna made a counter-proposal to move to an immediate vote to endorse a candidate and argued against any further discussion. This foreclosed the opportunity for members to find out more about the politics of all the candidates that may have wanted a Momentum endorsement. It was argued that the decision of the local group was irrelevant anyway as Momentum HQ had already decided: the main argument against discussion of alternative candidates was deference to the unaccountable leadership of Momentum.

Senior organisers of Momentum told outright lies about alternative candidates and the majority of those present were happy to go along with a process that denied them and all other members the right to make up their own minds through basic democratic practice. With no other options presented, Anna was endorsed unopposed but with several abstentions.

In November 2016, Momentum conducted a referendum as to whether we wanted a delegate based structure or “one member one vote” (meaning a system of online votes). Since that time, no member has had a vote on anything of any substance and local groups have no power at all – we are not even allowed to send out our own emails. “OMOV” was a lie and a power grab by a bureaucratic, in many cases unelected, clique afraid of rank and file organising.

I feel these anti-democratic practices of head office have miseducated some enthusiastic but inexperienced left-wing activists. In parts of Momentum, bureaucratic manoeuvring, scaremongering and slander have replaced rigorous open and honest discussion and debate.

The Corbyn surge has been an exciting time of hope and opportunity for socialist politics. As someone who has been active in the socialist movement for over a decade and very active in the “Corbyn movement” ever since 2015, I feel deeply disappointed that we have not held ourselves to a higher standard here in Truro and Falmouth.

Democracy is the oxygen of our movement and without it we are sure to flounder. I hope people will reflect on what’s happened and that we can do better in the future. Meanwhile, I will continue to organise as a socialist activist in the Labour Party and as a rank-and-file member of Momentum.