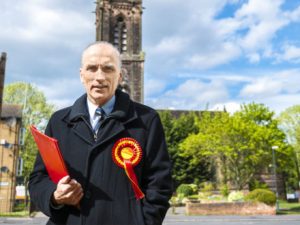 Derby North MP Chris Williamson’s resignation from the Shadow Cabinet has been speculated around by both right and left. Was he pushed out for not sticking to his brief? Has just found being a shadow minister stifling his ability to speak up?

He has been one of the more prominent “Corbynite” MPs, known for his weekly online videos.

His time as a shadow minister has seen him cozy up to the Maduro government of Venezuela, and represent some of the worst aspects of “international solidarity.”

What did cause the resignation appears to have been the call for a doubling of council tax on valuable homes as a way to combat local government cuts, something that is not. Although a highly debatable strategy it is an attempt to put forward policy on the cuts, something the Labour Party has singularly failed to do since 2010, and perhaps more glaringly since the election of Corbyn.

Williamson now says: “I decided to stand down to give me that freedom to feed the fire which keeps the establishment on their toes.” Undoubtedly being in the Shadow Cabinet would have tied him to the collective discipline that he felt held him back.

Raising council tax to fight the cuts is becoming increasingly popular as a strategy to further the “dented shield” approach against increasingly vicious rounds of cuts.

It is right that councils need to find a way to get back their funds, cut from central government since 2010. A joined-up campaign, nationally or even regionally of councils, affiliated local government unions, and the national party and wider movement to call for the restoration of these funds would be an obvious starting point.

Williamson is correct when he says: “After eight years of austerity, the argument that cuts are the responsibility of central government is wearing thin with the electorate. Following the enthusiasm with which the public embraced Labour’s redistributive 2017 manifesto, now is the time to start translating that ethos into Labour in local government.”

Local library closures in his own constituency of Derby North have convinced him that now is the time for a new approach.

This is proposed alongside a means-tested system of support for those on low incomes in higher-banded homes. He reckons that this could be won at a referendum of the local population, something that would be mandatory to raise council tax by this level.

Williamson cites the radical Labour leadership of councils like Lambeth in the 1980s which increased rates when they were able to, in order to combat the Tory cuts. What is missing is the actual record of the councils, in the end, not without a fight and some inspiring campaigning, were defeated.

As with the rates increase, without a fight against the government, the raising of council tax will still put pressure on households in areas like London and the South East where the number of Band A properties is relatively low. Although it could raise a lot of money, it could end up being a tax on some of the poorest and most vulnerable.

This policy idea deserves discussion but fundamentally the refusal of Labour councils to build and support anti-cuts campaigns since 2010 is a more serious issue. Too many councils have not just implemented Tory cuts but have done it with some glee and relish!

Labour councils must coordinate with local campaigns, call for support from the labour movement and the national party to begin a genuine fight to reverse the cuts and fight for decent services.