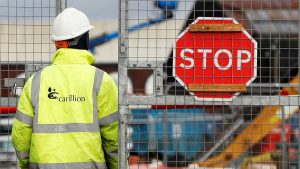 Carillion – the trade-union-blacklisting super-contractor that manages hundreds of public services and projects within the public sector, including schools, hospitals, libraries, prisons, military bases, and the HS2 project – today went into liquidation. They employ 40,000 people worldwide, 20,000 in the UK, and have 1400 apprentices. This will also impact an as yet unknown number of subcontractors who are dependent on their business, with reports estimating 30,000 firms are owed £1bn, increasing concerns that Carillion’s demise could cause a further number of insolvencies across the construction sector, indirectly affecting more workers. There have been reports already of 520 workers at a subcontracted Carillion site being literally locked out of their site and told they have been laid off.

The effect on workers’ ability to carry out their jobs has also been reported, with the RMT union reporting that trains would not be cleaned as the Carillion employees who are issued with vans to travel between rail depots could no longer use the credit cards they were issued by the company to pay for their fuel, and so could not get between jobs unless they paid upfront with their own money.

The Carillion collapse is the most stark example, in recent times at least, of the abject failure of the privatisation of our public services and the introduction of the profit motive into the public sector, but it’s not enough just to point this out. So, what should Labour be demanding of the Government and the labour movement be fighting for more generally?

The most urgent and pressing issue is that all Carillion employees’ jobs and pensions are guaranteed and safeguarded. The work that Carillion was contracted to do will still need to be carried out, and the current workers are best placed to do this, and deserve job security. This has to be the case for workers in both the private and public sector, in opposition to the Government’s confirmation this afternoon that they will only pay Carillion workers on private sector contracts for 48 hours from the collapse and will not offer them the same protection as the workers in the public sector.

This also needs to be extended to any workers in smaller firms, subcontracted by Carillion, who will be indirectly impacted. Bill Esterson, shadow business and international trade minister, has warned there could be massive knock on effects through the supply chain, and if Carillion’s suppliers aren’t paid their outstanding invoices, this could cause the loss of “thousands of jobs”.

While it has already been guaranteed that the Pension Protection Fund (PPF) will take over Carillion’s pension funds and employees who have already retired will be covered, it has been estimated that those still working will receive a cut in up to 20% of their payments. This needs to be made up by the Government.

Secondly, the Government needs to ensure that there are robust contingency plans in place to make certain that all the services Carillion run will continue unaffected, especially in crucial frontline services such as provision of school meals etc., and that these services will not suffer any cessation or drop in provision or quality. Oxfordshire Council have already reported that firefighters have been on standby to arrange for school meals to be delivered. Local authorities and housing associations are already reporting difficulties in urgently needing to backfill the work, causing considerable additional workloads and expense. No local authorities, health trusts, fire services, or any other public bodies should be spending their already squeezed budgets on covering the failure of Carillion, and should be compensated for any losses incurred.

All Carillion contracts should be brought back into public ownership immediately, as Rebecca Long Bailey has called for today. The Government has the opportunity to instantly renationalise all the services that Carillion were responsible for, ensuring that workers are immediately TUPE’d (transferred) into the public sector, and are therefore covered by Local Government or NHS collective bargaining arrangements. The prime minister’s official spokesman has already confirmed that the HS2 contracts will remain in the private sector, and it is vital that the same does not happen to the public service contracts. Vultures such as outsourcing giant Serco have already seen their shares jump by 5% in anticipation that they will pick up some of the contracts.

Shadow cabinet office minister Jon Trickett has called on the Government to explain why it awarded contracts worth nearly £2bn to Carillion even after it issued profit warnings, and both Labour and Unite have called for an inquiry into the collapse. Transport secretary Chris Grayling already has questions to answer over his decision to allow Virgin Trains to get out of their contract on the East Coast mainline which will cost the taxpayer hundreds of millions in lost franchise payments, and now he needs to answer more questions as to why he awarded Carillion a £1.4bn HS2 contract when it was already known the company were in financial difficulties. The prime minister’s spokesman has already said there are no plans for an official inquiry other than the Official Receiver’s report which is obliged to investigate the reasons for Carillion’s failure, which will be woefully inadequate in scope and enforcement.  Ministers responsible for handing over huge sums of public money to private companies who subsequently fail need to be investigated and held to account.

Renationalisation should be carried out with no compensation paid to shareholders or protection of dividends. With even the Institute of Directors criticising the directors and shareholders of Carillion for failing to provide “appropriate oversight” of the company, people responsible for the collapse should not be rewarded for failure. Labour should point out that the £1bn in profits from PFI that Carillion made were, of course, kept in the private sphere, yet the losses are now expected to be covered by the public purse. Richard Howson, Carillion’s former Chief Executive until he stepped down in July after a profit warning, earned £1.5m (including bonuses) in 2016, and despite quitting, is due to continue to receive his £660,000 salary until October of this year. These bonuses need to be paid back. As the GMB union – who represent some Carillion workers – demanded today, there must be no bailouts for the bosses.

There should be no rewards either; current chairman of Carillion, Philip Green (not to be confused with the Philip Green responsible for the collapse of BHS), is an advisor to the Government on corporate responsibility and in 2015 was a signatory to an open letter urging people to vote Conservative. Any accusations of cronyism cannot be denied while he remains in post. These relationships should raise further questions about the close links between these parastatal companies and Government itself.

These are all vital demands that Labour need to make of the Government in a timely manner, and that we should be pressing for within our own CLPs, but simultaneously we should also be aware of their limited reach – state ownership is not and should not be an end in itself and is not unproblematic. Jeremy Corbyn’s video statement on Carillion this evening should be welcomed for going further than just pledging to renationalise Carillion, and extending this to the entirety of the failed PFI model, but it is not enough to call for our public services to be run “for the benefit of the many, not the profits of the few,” – we need to start talking about what that actually means and what that would look like in practice. This should be the start of debates as to how public services, and indeed wider industry, should be run, and the important political distinction between simply ‘state control’, and democratic bodies run and controlled by workers and service users. At a time when the idea of renationalisation is increasingly popular, we should be arguing for it as the precursor to more expansive and radical ideas for how we ultimately envisage our society; state control of all public services shouldn’t be the end of our demands, but the beginning of them.

• For our model motion on Carillion for CLPs and union branches, see here.