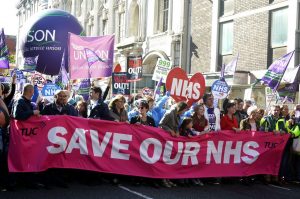 At a recent Socialist Health Association meeting in Manchester (16th December 2017), Richard Bourne outlined ideas for the future of the NHS, based on the idea that we are now entering the Third Era for the NHS (the First Era being Bevanite bureaucracy and the Welfare State, and the Second Era being about neo-liberal promotion of markets and competition with regulation by the state).  He argued that this gives “a major opportunity to articulate a vision for a better care system” based on social rights and an enabling state. There are many continuing, unresolved issues for the NHS, not least of which are how to achieve sustainable long term funding, but also accountability, quality, variation and inequality, fragmentation. He felt that the NHS should be merged with (or taken over by?) local authorities, as they have a basis of democratic accountability via election.

While the audience at the meeting were in agreement with much of what Richard Bourne said, particularly in the analysis of problems facing the NHS under this Conservative government, there is still clearly a debate about whether local authorities would be the best place for the NHS to be placed.  That debate should not only be about the organisational form and structure, but also what ‘democratic accountability’ could mean.  Elections are just one form of democracy, and they only take place occasionally.  Real accountability should include other ways of involving people in planning and decisions and the way that services are delivered.

However, in this article I want to concentrate on another aspect of the session: what organisations should provide NHS services.  Richard Bourne referred to the founding and enduring principles of the NHS:  that it should be universal and comprehensive, free, tax funded, and a single payer (by which I presume he meant ‘the state’ rather than people having to pay for bits of it).  I found it significant that he did not include as a principle that it should be publicly provided, even though he did say that there should be an end to and reversal of privatisation and outsourcing.  He explicitly said that there should be a “plurality of organisations” providing NHS services, which would mostly be public bodies, but that there should be an enhanced role for the voluntary and not-for-profit sector and a limited role for the for-profit sector.

I do not believe that this is the vision for the NHS which Nye Bevan had.  Outsourcing and privatisation have been a crucial way in which the NHS has been attacked and undermined.  Outsourcing of cleaning, catering and a whole range of ancillary services led to much worse terms and conditions for staff, a multitude of providers all searching for ways of making more profit, and often a deterioration of these ancillary services for patients.  Privatisation of NHS clinical and other services has rocketed in recent years.  In Greater Manchester in 2016/17 between 12.2% (North Manchester) and 23.5% (Oldham) of healthcare services were purchased from non-NHS providers.  The total spent on healthcare services was £3,339,328,000 of which £584,794,000 (17.5%) went to non-NHS bodies.  So this is not a trivial amount.

At the SHA meeting, there was no disagreement about stopping privatisation to the private sector.  But as well as Richard Bourne, one or two people argued that the voluntary sector was crucial, and also that more volunteers should be encouraged to work alongside paid staff.  One person went so far as to say that public services don’t deliver good services, and that the NHS is a monolithic bureaucracy which doesn’t deal well with individuals and is not innovative.  There isn’t space here to take on all these points, but briefly: the NHS is not one monolithic bureaucracy, it is numerous separate organisations (Trusts and Clinical Commissioning Groups) which should be overseen by national standards and principles to ensure that everyone receives the healthcare they need; although they have been distorted by the purchaser/provider split and marketisation and by grotesque underfunding, most of these organisations and the staff within them still provide an excellent service; there are numerous examples of innovation – in research, in organisation and delivery of services, in meeting individual patient’s needs – perhaps the failing is in publicising these.

I and others argued that big voluntary and charitable sector organisations have been complicit in the attack and fragmentation and marketisation of the NHS by participating in tendering and competition.  They have taken over chunks of the NHS, mostly non-clinical services, such as health promotion, alcohol and drugs services and mental health services.  Not only has this often led to poorer pay and conditions for staff, but instability and fragmentation of services making it more difficult to provide comprehensive, joined-up services for all users.  These big organisations may be non-profit making, but they often operate in much the same way as the private sector in bidding for and winning contracts.  Richard Bourne said that organisations which provide public services are “bound by duties to collaborate and cooperate with each other” and should “work together to deliver integrated services and support which is valued by the recipients and which achieves levels of quality comparable to the best anywhere in the world”.  But can they really do this when they are competing with each other for work?

There certainly should be an important role for the voluntary sector and local community groups in making sure that different communities – not just geographical but communities of interest too – are involved in planning of services and the way that they are delivered.  That role should not extend to the actual takeover of NHS services, thereby taking them out of the public sector.  Volunteers involved in schemes such as peer mentoring in mental health services complement the work of paid staff, but there should not be more space for unpaid labour to relieve hard-pressed staff.

• Caroline is a retired former NHS worker and Unison activist.