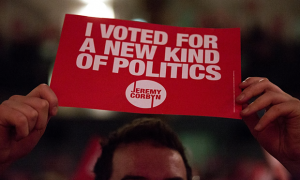 Exactly a year ago today, at 19:39, an email landed in the inboxes of Momentum’s Steering Committee from Jon Lansman, the Steering Committee Chair. Out of the blue (for some of us, at least), and with a conference already planned to debate the issue democratically, it proposed a new constitution for Momentum, which banned non-Labour members and promised to replace existing structures with an online democratic system. By 20:54, a majority had been declared in favour of its contents. Momentum’s entire democratic structure was abolished instantaneously.

The “coup”, as it became known, was the culmination of half a year of deep internal conflict, fought ostensibly over which kind of structures Momentum should have. Really, however, what we were debating was the purpose of the organisation. One year on and Momentum is a much slicker, top-down mobiliser of Labour members in internal and general elections. But not a single online vote has taken place. A large number of the local groups have withered (though some have remained strong and new ones have also appeared). The idea of Momentum as a “grassroots movement” – with all the messy internal democracy that necessitates – now exists only as a cliché in the mainstream press.

The six months running up to the coup were unpleasant. Following Jeremy Corbyn’s second leadership campaign, plans for the organisation’s founding conference – called at a meeting of the National Committee in May – were repeatedly stalled. In the autumn of 2016, the Steering Committee (effectively the Executive, on which Lansman and his allies had a majority) first refused to allow the National Committee to meet, and then imposed an online system of voting for deciding the constitution, effectively cancelling the conference. With local activists up in arms, and the fiasco spilling into the national press, they briefly backed down. Eventually, at a tense National Committee meeting in December 2016, the pro-conference side won a narrow majority, overturning the Steering Committee. A motion to elect a new Steering Committee, however, was narrowly defeated.

Even in this nasty atmosphere, the ruthlessness of the coup stunned us. As Momentum’s Treasurer – one of the three “officers” responsible for the day-to-day business – I spent most days in the office and had a close relationship with staff. I was puzzled as to why I could not get the Steering Committee to meet for six weeks, especially in light of a series of major administrative issues I had flagged. Of course, I know now what everyone was busy with. The Steering Committee did not technically have the power to overrule the National Committee, but with Lansman as the sole Director of the Limited Company which owned the data, this didn’t matter. What they needed was legitimacy.

Immediately after the December NC, a machine clicked into operation to get exactly that. First, the pretext was created: the nasty internal conflict was declared not to be the result of badly managed differences over the purpose of the organisation, with various manoeuvres by the leadership contributing to a breakdown of trust, but the result of “entryists” and “wreckers”. Core Momentum spokespeople who had spent the leadership campaign denying the influence of “shadowy Trotskyists” on the organisation now became the proponents of a narrative that sounded as if it had been written by Labour First.

Then, somehow, they managed to get Corbyn’s office on board with a survey to all Momentum members, in which Corbyn himself asked members what kind of democratic structures they’d prefer. The wording of the questions was comically biased, and clearly designed to produce only one result. Without asking the Steering Committee, staff sent out the survey on December 20th. It was the return of these results, in which an overwhelming majority of members said they wanted fluffy clouds and rainbows, that was the final trigger for the coup to happen. It appeared that those years in the wilderness had taught the old Labour left something – they could behave like Blairites too, when it suited.

By now, the atmosphere in the organisation had become so toxic and unpleasant that many activists accepted the imposition of the new constitution, even if they opposed both its contents and the means by which it had been introduced. Some activists briefly considered a legal challenge, but quickly understood that it would be expensive and destructive. Attempts to set up a new organisation without the resources or data that Momentum had were always bound to fail. And so those of us who opposed the coup had no real option but to do our best to continue organising within as well as outside the new framework. Some left Momentum or drifted off.

The decision that was taken by email in those 75 minutes exactly one year ago has undoubtedly changed the course of history. It set Momentum on the course to being a professionalied Labour Party faction. Even the structures it created – with a National Coordinating Group comprising a minority of elected members, as well as councillors, MPs and trade unions – closely resemble both the Labour NEC and the Progress Advisory Board. We will never know whether or not Momentum could have played its critical role in the 2017 snap election without the coup – though, as one senior Momentum figure told me last year, “in a dictatorship, at least the fucking trains run on time.”

But at what cost has this efficiency come? One year on, no online votes have taken place, and in fact there is not yet even a mechanism by which to initiate one! Momentum has effectively no means of making independent policy or undertaking independent campaigns. Applying for Momentum backing in an internal party election is like applying for a job; no voting takes place. There is no democratic link between local activists and the centre of the organisation. Momentum does take big controversial political decisions – for instance when it blocked the Brexit debate at Labour Party conference in 2017 – but how these decisions are taken is a mystery.

The dangers of this situation are serious, and are yet to be fully explored. The left – before and during a Corbyn-led government– desperately needs a democratic space to organise. The lesson of every single encounter between the radical left and state power is that the base of the movement must be willing to push the leadership, and must have adequate mechanisms for doing so. Those mechanisms will be messy, as democracy always is, but without them we will face mass disillusionment and ultimately defeat, even if things seems easier in the short run.

Perhaps the greatest danger, however, is in the effect that the coup has had on a generation of new activists. It ought to be anathema to “a new kind of politics” for decisions to be taken in this way, and yet they were. The culture of organising that inspired it – cliques, secret meetings, bypassing democratic structures, dishonesty and manoeuvring – won legitimacy from the outcome. The lessons that many new activists learned from this episode were all wrong, and, on the brink of government, we do not have long to correct them.