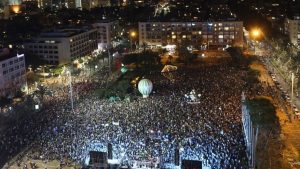 Socialists in Labour keen to develop a politics of internationalist working-class solidarity in relation to Israel/Palestine should look beyond the Israeli Labor Party, with whom the Labour leadership currently has official relations.

Shadow Foreign Secretary Emily Thornberry recently visited Israel on a trip organised by Labour Friends of Israel, a pressure group inside Labour. The trip included a meeting with a delegation of Israeli Labor MKs (Members of the Knesset, the Israeli parliament). John McDonnell also hosted an Israeli Labor delegation at the 2016 Labour Party conference.

The links originate in both parties’ historic membership of the Socialist International (although UK Labour has been an observer, rather than a full member, since 2013). The Jewish Labour Movement, an affiliated socialist society within Labour, also has formal links to Israeli Labor and a common ancestor in the socialist-Zionist party Poale Zion. The future founding prime minister of Israel, David Ben Gurion, led a right-wing split from Poale Zion in 1919, which would go on to be a founding element in Israeli Labor.

Israeli Labor is formally opposed to Israel’s occupation of Palestinian territories, and for an independent Palestinian state. Zionist Union, the coalition in which it participates, supported the May 2017 mass demonstration against occupation and for Palestinian independence (pictured above), which saw tens of thousands march in Tel Aviv. Labor’s then leader Isaac Herzog spoke at the rally.

However, Israeli Labor has also sought and entered coalitions and “unity governments” with the right, and its opposition to occupation has frequently been timid and mealy-mouthed. The historic enmeshment of much of the mainstream labour movement with the nationalist project of state-building, with all that implies in terms of the initial exclusion of Arab labour from much of the Israeli economy (and, until the late 1950s, from the labour movement itself), has also meant that more radical and internationalist politics have developed outside the official Labor Party.

There is a particularly pressing need to make links with the left beyond Labor now, following the election of a new right-wing Labor leader, Avi Gabbay. Gabbay, a millionaire business executive and, prior to his membership of Labor a founder of the centre-right Kulanu party and an environmental minister in Netanyahu’s government, is opposed to dismantling illegal settlements and has a borderline-racist attitude towards Arabs. He has ruled out in advance any cooperation with Arab parties in the Knesset. Rather than supporting Palestinian independence and statehood on the basis of internationalism and mutual acknowledgement of rights, Gabbay’s version of a two-states settlement involves begrudgingly the affording the Palestinians the minimum degree of independence possible to ensure continued security and Jewish majority for Israel.

As well as seeking to support and ally with socialists, trade unionists, feminists, LGBT activists and others struggling against occupation and for freedom and equality in Palestine, socialists in UK Labour should advocate that the party seeks discussions and links with a range of forces on the left in Israel. The Meretz party, left-Zionist but more vigorous and consistent in its opposition to occupation and settlement building than Israeli Labor, is also a full member of the Socialist International (as is Fatah, which leads the Palestine Liberation Organisation and is currently the governing party in the Palestinian Authority). It currently has five MKs. JLM also has links to Meretz, as well as Israeli Labor.

Further to the left still is Hadash, a coalition initiated by the Israeli Communist Party, which participates in the Joint List initiative with Arab parties and also has five MKs. The much smaller, revolutionary-socialist, Da’am Workers’ Party has also contested elections in recent years, and is the only party led by an Israeli-Arab woman (Asma Agbarieh). The Workers’ Advice Centre, which organises both Jewish and Arab workers, often in industries and sectors ignored by Histadrut, including within settlements, is led by supporters of Da’am.

It is groups like these, as well as internationalist, anti-occupation campaigns, NGOs, and activist coalitions, such as Gush Shalom, New Profile, and others, that represent the real left in Israel. The embattled movement of teenagers refusing to be conscripted into Israel’s army of occupation is also a key element; in December 2017, 63 students signed an open letter refusing conscription, opposing the occupation, condemning nationalism, and supporting workers’ rights within Israel. UK Labour should amplify such voices and support their struggles.

It is, perhaps, a little overambitious to hope that on the next official visit to Israel, senior Labour Party figures will meet with representatives of small revolutionary socialist groups and radical workers’ centres as well as Labor Party MKs. But socialists in Labour can do much to promote the policies and campaigning of Israel’s radical left, and advocate for practical solidarity with them.

If UK Labour wants to be a force on the world stage to promote the kinds of policies laid out recently by Jeremy Corbyn – for an end to occupation and illegal settlement building, and a genuinely independent Palestine alongside Israel – it must seek links with the forces in Israeli society genuinely fighting for these aims, in the teeth of hostility from a racist, nationalist government and its supporters. Those forces are to be found to the left of the Israeli Labor Party, not within it.